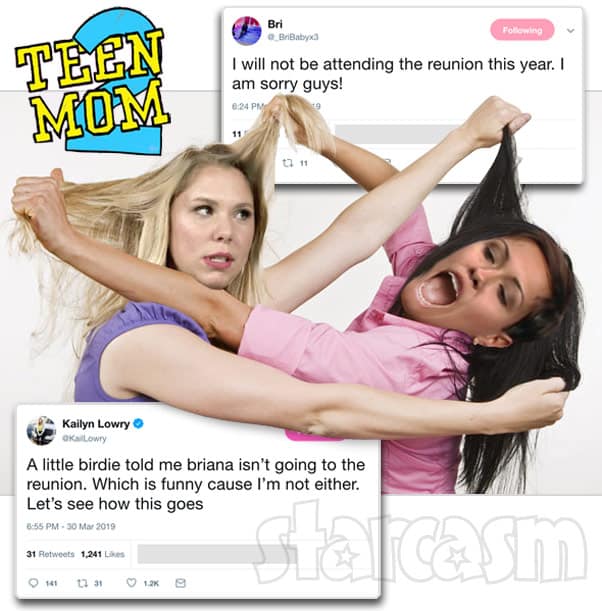 The upcoming Teen Mom 2 Reunion is beginning to sound like it might just be Leah Messer, Chelsea DeBoer, and — of course — Javi Marroquin. Briana DeJesus just announced on Twitter that she will not be attending, and Kail Lowry later said she wouldn’t be there either. This all comes just one day after Jenelle Eason said she has an upcoming doctor’s appointment that will determine if she will be there or not.

“Lol what a f**king joke,” Briana tweeted moments ago. She followed that up quickly with another tweet: “I will not be attending the reunion this year. I am sorry guys!”

Not long after Briana’s announcement, her co-star and former nemesis Kail Lowry shared a similar reveal. “A little birdie told me Briana isn’t going to the reunion,” she tweeted. “Which is funny cause I’m not either. Let’s see how this goes.”

Teen Mom 2 fans will recall than Briana and Kail were at the center of the physical altercation that went down when the cast was together for the last Reunion taping. After having words backstage, Kail was sitting on stage for an “Unseen Moments” taping when Briana stormed on set and absolutely lost it.

Kail circled back behind the couch, and that’s where Briana’s sister Brittany DeJesus grabbed Kail by the hair and yanked her head back.

Briana recently revealed that MTV was going to avoid any similar altercations this year by keeping all the moms separate. “Everyone is being segregated/separated this year, so we won’t cross paths,” Briana told Radar Online, adding that the moms wouldn’t even have the chance of bumping into each other backstage as they would be arriving on different days.

“This will be the first time in Teen Mom history I believe that the entire cast is not on stage together for any part of the show,” Briana said. She adds that MTV was going to extra lengths due in part to the fact that Briana was injured during her altercation with Kail last season.

“When everything started to go down and I was backstage being held back by security, I ended up falling and scraping the bone on my leg,” Briana said. “It was so bad that I almost needed stitches.” She says that she still has a “bad scar” from the injury. “It was the first reunion someone got actually physically injured and I think they thought there’d be too much risk of something going down again,” she continued.

As Teen Mom 2 fans will also recall, Jenelle Eason was not in New York City at all for the Reunion. She taped her segment with Dr. Drew near her home in North Carolina due in part to the fact that MTV refused to allow her controversial husband David Eason to make the trip with her to New York.

Despite MTV not changing their stance on David, Jenelle recently said that she would be making the trip to New York City this year. Here’s a Twitter interaction between TM2 besties Briana and Jenelle on Monday: 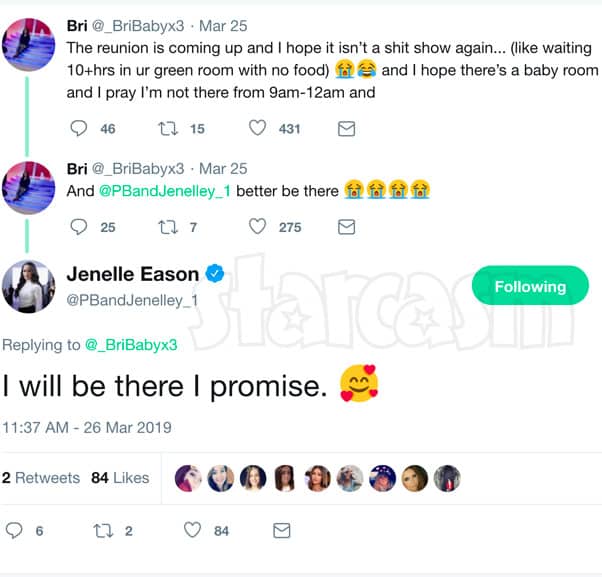 Clearly, that was prior to Briana’s announcement that she wasn’t planning on attending.

Jenelle, being a seasoned reality show veteran, had already put her contingency plan in motion it seems. “I’ve been in a lot of pain, more than usual, for the last two weeks,” Jenelle told E! News on Friday. “I’m seeing a doctor next week to see what they say about traveling for the reunion, but that appointment is also to discuss surgery possibilities.”

She continued: “I wanted to be honest with everyone now before confirming the trip and cancelling last minute and wasting everyone’s time and money… It is really disappointing though because I had other things planned during my trip other than the reunion and this is holding me up from everything.”

Just in case I needed to say it, there is nothing in stone yet. I assume that show producers are talking with Briana in an attempt to change her mind. This is purely speculation, but I am guessing that MTV let Briana know that they wanted the cast to film together (otherwise, what is the point of a “Reunion?), and that’s what made her decide not to go.

I also believe that if they convince Briana to go that Jenelle will follow. Kail? It’s seems absurd that she wouldn’t be there. I’m thinking her tweet was just a joke of some sort, or perhaps just a snarky jab at MTV for letting Briana back out? I suppose we will know more soon as the Teen Mom 2 Reunion is scheduled to film next weekend! Stay tuned…

UPDATE – There have been a few updates from Briana and Kail via Twitter. Briana responded to Kail’s tweet about a “little birdie” by retweeting it and adding a ??‍♀️ emoji. “Y’all need to grow up,” one follower replied. “We all have to deal with co workers we don’t like DAILY and y’all have to deal with it for a day maybe two. Pathetic.” Briana replied by claiming her absence had nothing to do with with her beef with Kail. “Lol it has nothing to do with her personally,” she tweeted.

Meanwhile, someone else responded to Kail’s tweet by questioning whether or not the Reunion was mandatory because of the cast members’ contracts. “I thought it was in the contract that all of you HAD to go?! What’s the point of the reunion with no girls?! ?”

Kail then explained: “When people aren’t being treated fairly and things are not the same for all cast members across the board, things become hostile. ??‍♀️”

I would assume given Kail’s comment that this was turning into a Farrah Abraham situation in which MTV producers were bending over backwards to accommodate Jenelle (separate Airbnb, etc.). But, that doesn’t explain why Jenelle’s ally Briana is not only not going, but she’s retweeting Kail’s comment about it being unfair that cast members are being treated differently. ??‍♀️

UPDATE – We now know what the hubbub was about and what producers reportedly had to do to convince Briana and Kail to attend! Click the link for the scoop!