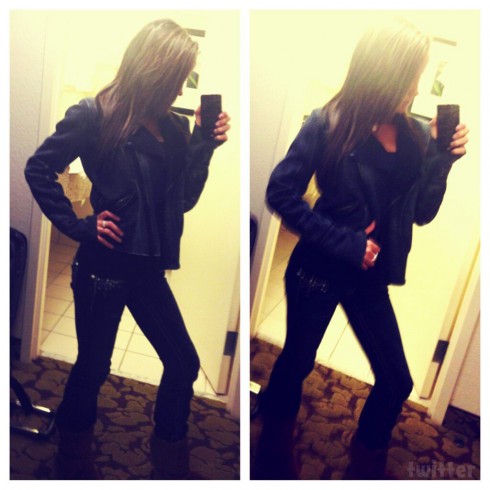 Teen Mom 2 star Jenelle Evans made a brief virtual appearance online yesterday and today after nearly a week-long stay at a Florida rehab facility, but just as we had reason to believe was going to happen, she has now apparently checked into a separate facility — this time for a much longer stay.

Jenelle said her goodbyes on Twitter, letting her son Jace know she was doing it for him:

This is for u jace, no one else. If anyone deserves this u do. Love u so much buddy. :'( bye everyone. ❤

Though details are sketchy as usual, it appears that Jenelle checked out of the Florida rehab facility on Friday and stayed the night in hotel there (from which she posted the photos above and the one to the right wearing just a bra and jeans). She then caught a flight today that had a layover in Atlanta. We’re not sure where the new facility is – we can only surmise it isn’t in Florida or Atlanta 😉

UPDATE – We spoke with Jenelle’s Facebook admin Kristin, who was in contact with Jenelle over the last couple days. She confirmed the timeline above telling us that Jenelle “left the facility last night and got a hotel room. She stayed the night there and flew out of Orlando this morning and into Atlanta.” So where is Jenelle now? “She then flew to a facility further north,” is all Kristin was allowed to say.

And as far as how long Jenelle will be there, Kristin says, “She will be there approximately 30 days.” Kristin wants to make it clear that Jenelle is not getting treatment for drug addiction. “She is there to get her life on track,” Kristin says. “Nothing for drugs. She has been clean since November, 2012.”

UPDATE (March 5) – An iside source for Radar Online appears to dispute Kristin’s claims as the site published an article today titled “She’s Serious This Time! Jenelle Evans Checks Into Rehab Again To Kick Heroin Habit.” “She basically freaked out over all the crap in her life,” the source said. “Jenelle was just partying and doing drugs and doing really stupid things with guys and she couldn’t stop.” The source then added, “Jenelle knows she needs help. She feels like sh*t when she does all the drugs and has the guys treating her badly so she’s hoping this will really help her this time.”

Once again, let us say that Jenelle does need help, and she does need a break. It sounds as though she is entering this time without a guy “waiting for her,” so maybe she will be able to reset completely and detox from not only whatever drugs she may be having issues with, but also the extremely toxic relationships she manages to string together with little or no pause in between.

We will try to update you, but chances are we won’t be hearing anything reliable until close to her departure date.