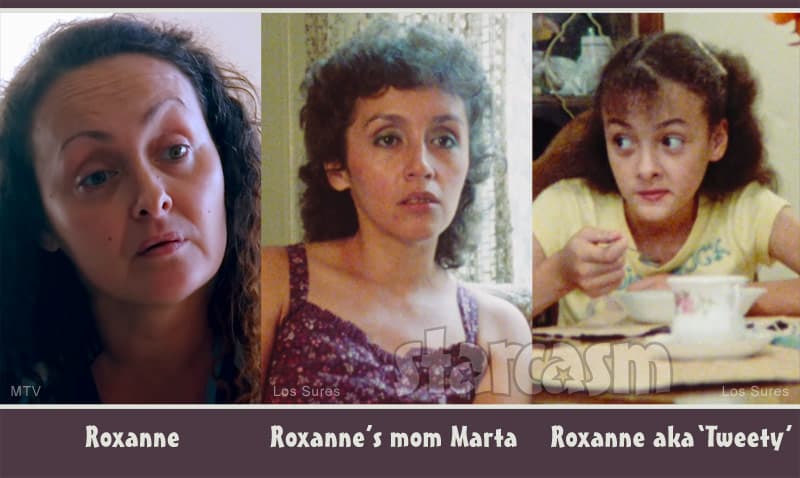 Briana DeJesus has quite the reality TV resume, including her initial appearance on 16 and Pregnant, then Teen Mom 3, and now she is the newest cast member of Teen Mom 2. But, it turns out that sharing a personal story in front of cameras is nothing new for Briana’s family! Her grandmother Marta was one a of a handful of Brooklyn residents featured in the 1984 documentary Los Sures. The film also documents Marta’s five children, including Briana’s mom Roxanne when she was going by the nickname Tweety.

Here is a screen cap of young Roxanne sporting her Disco Duck t-shirt and looking EXACTLY like a young Roxanne: 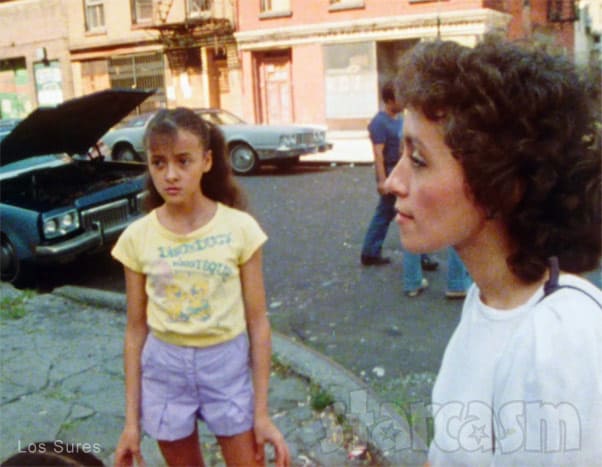 In the documentary, Marta talks about living in Los Sures, and she shares a lot about her personal history. She’s a single mother of five, with one son and four daughters. She admits that she does not work and is on welfare at the time, mostly due to being unable to find time while raising five children. There is scene in which Marta and her four daughters go shopping, and she talks about how she handles living on a food stamps budget month to month. (The footage of a Brooklyn grocery store in the 1980s is a great little trip through time.)

Just like Roxanne and Briana, Marta reveals that she has spent most of her life without a man. She says that she married the father of her first three children, but says that he was “very abusive.” She then added: “And that’s only putting it kindly.”

Roxanne (aka Tweety) was Marta’s fourth child, and the story with her dad was much different. “Tweety’s father was a very loving man,” Roxanne says. “He’s a good man. We separated because of drugs. Drugs brung about a situation where it was very bad for us to keep together. So we broke up.”

Marta says she was in a six-year relationship with the father of her fifth child, but they never lived together. She says that the relationship never grew, and eventually they split as well.

Here is a preview trailer that features Roxanne with Marta’s narration:

As much as I love the seemingly random fact that Roxanne was featured in a documentary from the 1980s, what is even more astonishing is just how amazing the documentary is! Los Sures tells the story of one of Brooklyn’s poorest neighborhoods, which had a very large Hispanic population — mostly from Puerto Rico. The footage and the narratives from those individuals and families featured are nothing short of a priceless time capsule.

Here is a synopsis of the documentary from IMDB:

Los Sures introduces itself as “a portrait of a neighborhood from the personal experiences of a few people who live here.” Shot in 1984 by Diego Echeverría, the film offers an intimate, mosaic-like study of the South Williamsburg neighbourhood and its predominantly Puerto Rican and Dominican residents.

Los Sures is at once a rich snapshot of pre-gentrification Brooklyn and a testament to the importance of community. Separated into a series of individual and family profiles -punctuated by observational glimpses of the neighbourhood’s street life- the film’s scope is deceptively vast. While the interviews and testimonials are focused and personal, Echeverría emphasizes the importance of place and space throughout, revealing the deep imbrication between these individuals’ identity and their environment.

In the late 70’s and early 80’s, Los Sures was one of the poorest neighborhoods in New York City. In fact, it had been called the worst ghetto in America. Diego Echeverria’s film skillfully represents the challenges of its time: drugs, gang violence, crime, abandoned real estate, racial tension, single-parent homes, and inadequate local resources. The complex portrait also celebrates the vitality of this largely Puerto Rican and Dominican community, showing the strength of their culture, their creativity, and their determination to overcome a desperate situation. Beautifully restored just in time for the 30th anniversary of the premiere at the New York Festival, this documentary is a priceless piece of New York City history.

The documentary is such an important piece of New York City history that it has since inspired numerous other follow-up projects under the “Living Los Sures” umbrella. Here is a description of that project from the UnionDocs website:

Produced over 5 years by 60 artists at UnionDocs Center for Documentary Art, LIVING LOS SURES is an expansive project about the Southside of Williamsburg, Brooklyn. Known by its long-term Latino residents as Los Sures, the neighborhood was one of the poorest in New York City in the late 70s and early 80s. In fact, it had been called the worst ghetto in America. Today, it is the site of a battle between local identity and luxury lifestyle. With the restoration of LOS SURES, a brilliant work of cinéma vérité filmmaking as a starting point, the project has developed into a collection of 40 SHORT FILMS, the interactive documentary 89 STEPS, and the cinematic people’s history SHOT BY SHOT, demonstrating new possibilities for collaboration between an arts institution and its surrounding community to collect memories and share local culture. 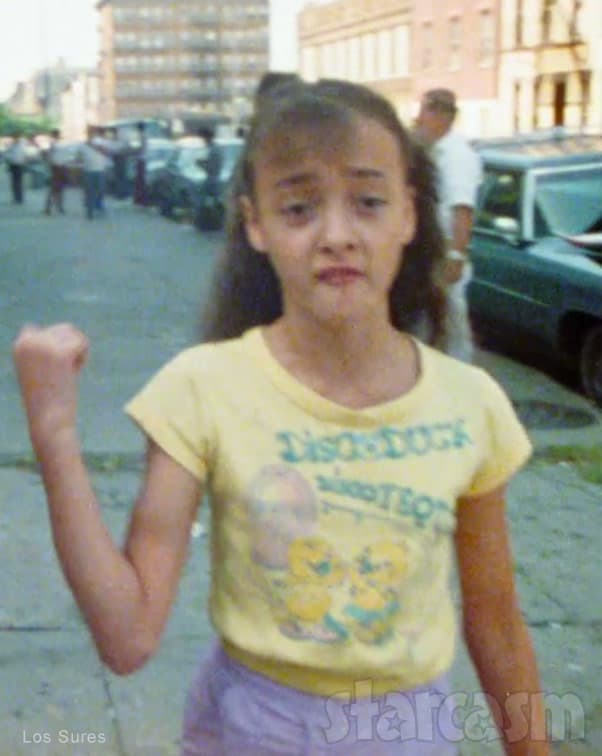 89 Steps is an interactive follow-up documentary featuring Roxanne’s mother Marta as she chooses to sell her apartment after nearly 40 years of living there. The title is in reference to the apartment being a 6th floor walk up with 89 steps to reach the ground level.

In the footage of Marta’s apartment in 89 Steps, you can see numerous framed photos — including ones with Briana and her family. And speaking of Marta, Briana, and her family, I will wrap up this post with some Instagram photos featuring the ladies of House Marta!

But, before that, I want to give a HUGE shout out to u/palegreyrose on reddit who posted about Roxanne being featured in the documentary late last night! I can’t imagine what it was like for her watching this documentary without any idea of it’s connection to Briana, and then seeing a young Roxanne pop up!

I highly recommend that everyone shell out the whopping $3.99 and watch this video via Amazon — or however else you can track it down. I’m the furthest thing in the world from a Hispanic New Yorker, but watching the film made it feel as though I was breathing 1984 Brooklyn air and walking those same sidewalks and stairs. Perhaps more importantly, I felt like I got to meet and really get to know a handful of people living there and then — as much as that is possible in a 32-minute documentary anyway.

OK, here are those photos of Briana, Roxanne, Marta and more members of their family — including some of Roxanne’s siblings (I believe): 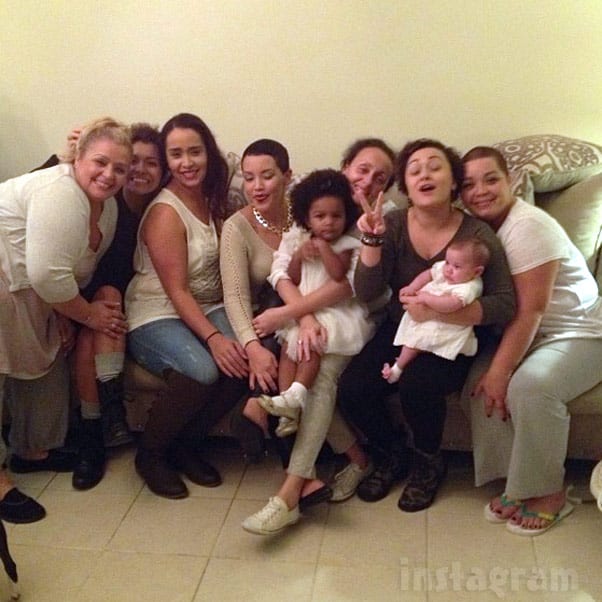 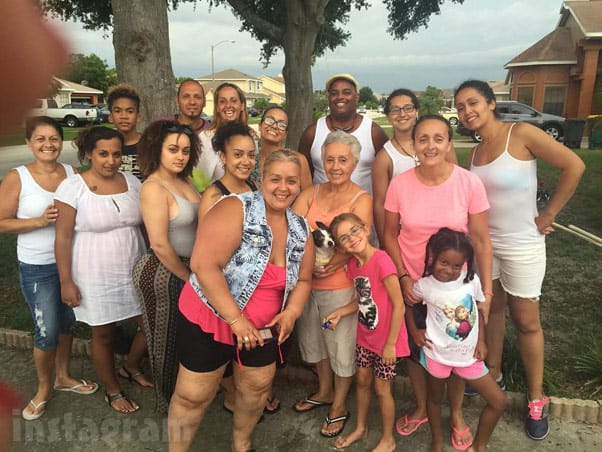 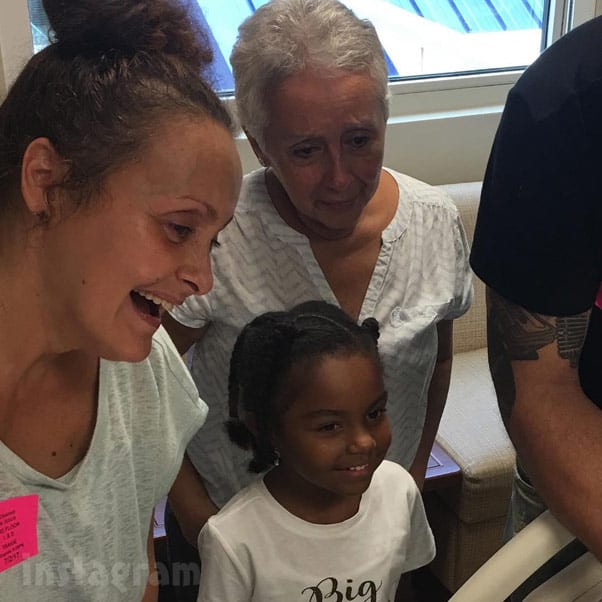 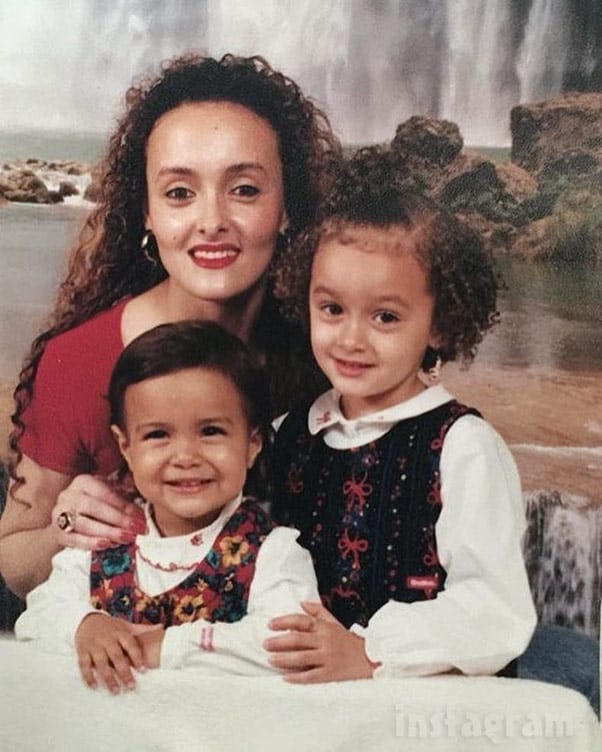