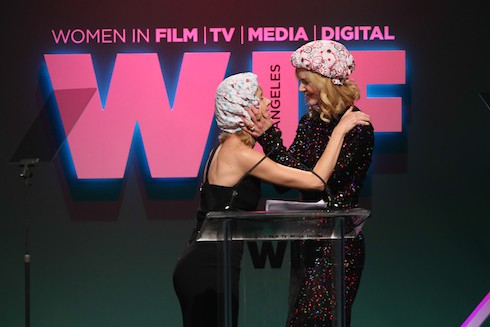 Nicole Kidman and Naomi Watts made out onstage at last night’s Women in Film awards ceremony. The two have been friends for quite awhile–but that’s not why they did it. They were also wearing shower caps at the time, but not because they expected an especially sloppy makeout session. It was not a “very awkward, staged lesbian kiss,” as has been known to happen at other awards ceremonies. And it wasn’t a Britney and Madonna-style stunt. 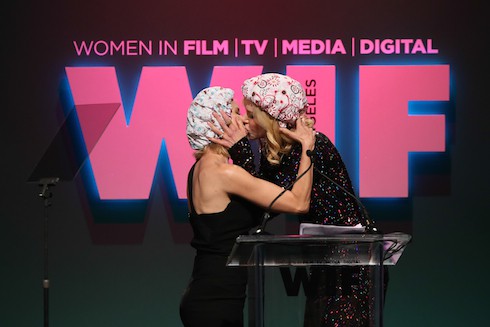 Nicole Kidman was on hand to give a speech on female empowerment. In her speech, she discussed a role she’d been too afraid to take–she was fourteen, and the student film was A Girl’s Own Story, directed by eventual Palme d’Or winner (for The Piano) Jane Campion. Kidman explained why the role scared her off:

My excuse was that I had final exams to study for, but the truth is the part would have required me to appear up on the screen wearing a shower cap and kissing a girl….I wanted to be the kind of actress with long flowing hair [who] kissed boys….I was not ready to do the kind of work that threatened anybody. Well, today I know better and I say, ‘Jane, if you’re out there…I’m ready to don this cap.’ 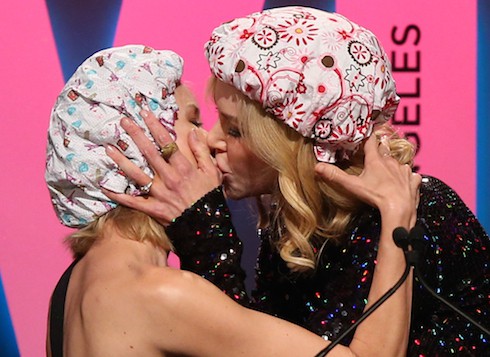 And Nicole Kidman proceeded to do exactly as she said, snapping the shower cap atop her head without missing a beat. She continued:

Let’s pledge together today to be there for that girl, to support her artistically, emotionally, financially. Let us create opportunities for her and teach her to manage that inner voice that is trying so hard every day to hold her back. Let us show her that she is strong, smart, and talented and she deserves every part that might interest her and at equal pay, too….Let’s stand tall and never ever apologize for it.

At which point Naomi Watts rose from her seat to stand by Kidman’s side onstage, don her own shower cap, and, to the great delight of the audience, reenact the scene Kidman had been too frightened to try out at fourteen.

Earlier this year Watts explained how Nicole Kidman has been a great friend to her for over twenty years, and particularly in the earliest stages of Watts’ own career. “It was scary trying to find work and having no money and no medical insurance,” Watts said. “I had very few friends and would spend days alone, sitting in cafes feeling miserable. I was lucky that Nicole Kidman was always there to support me, console me, keep my spirits up and help me believe in myself. She’s been such a good friend over the years.”

Nicole Kidman Offends The Rest Of Australia By Blowing A … Didgeridoo!