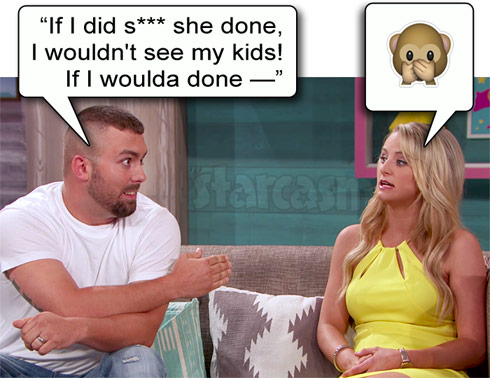 Last week we shared an explosive preview clip from Part 2 of the Teen Mom 2 Reunion with Dr. Drew. The clip featured Leah Messer and Corey Simms getting into a heated argument over Corey’s wife Miranda, and included Leah seemingly referencing the report that Corey cheated on Miranda with her. Just as the discussion reached Jerry Springer levels, Leah said “monkey.” OK.

Corey continued with what he was saying, but a woman in the audience yelled out “She said monkey!” at which point Dr. Drew halted everything and explained to Corey, “That’s stuff that she doesn’t want to go into — she’s agreed not to go into.”

Although it’s still a little unclear exactly what the Leah’s off-limits topic was, we do have some more details about the safe word, as well as some behind-the-scenes drama between Leah’s family and Miranda.

The Ashley’s Reality Roundup reports that the woman who yells “She said monkey!” from the audience is Leah’s mother, Dawn Spears. An on-set source said Dawn was extremely concerned for Leah’s well-being. “She claims that Leah almost died from stress and anxiety before she went to treatment,” the source said. “She said Leah’s blood pressure was sky-high. She didn’t want Leah to go to the reunion, but she has to due to her contract.”

Dawn did work out a compromise, however, and that was for Leah to have a safe word whenever “she felt things were getting too intense.” That would seem to suggest that Leah had carte blanche to stop everything at any point, not just to avoid a specific topic.

Corey’s frustration eventually wore off, and he and wife Miranda later had a good giggle at Leah’s safe word. Dawn reportedly overheard them laughing and blew up. 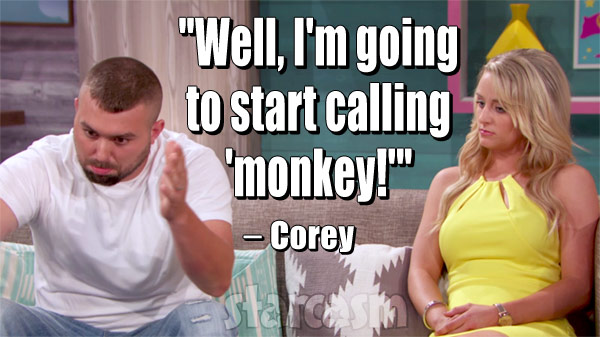 Meanwhile, in a previous post, The Ashley revealed that Miranda went off big time on Leah on screen! “Miranda called Leah out for putting the twins in potential danger,” a set source said. “Everyone on set was stunned. No one expected Miranda to go off like that because she’s usually quiet. Leah couldn’t really even deny that she bashes Corey in front of the kids, because it’s true. Leah couldn’t really deny anything Miranda was saying.”

The source adds that Dawn Spears was yelling from the audience yet again, but I don’t think it was “monkey” this time. “Leah’s entire family hates Miranda,” a family source said. “They blame her for severing the decent co-parenting relationship that Corey and Leah had.”

And the feeling is mutual. “[Miranda] is fed up with Leah’s lies and inability to take responsibility for her poor parenting choices,” the family source continues. “Despite what you see on TV, Leah and Miranda have not gotten along for years.”

Miranda, who was pretty quiet during her first season on the show, is not only speaking up on air now, she’s letting her followers know how she feels on Twitter: 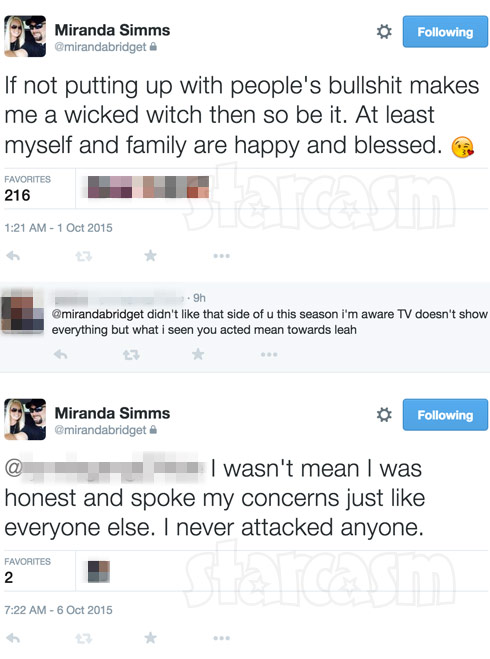 The heightened tension at the Reunion would help explain the now-infamous photo, posted by Corey at the time, which included him and Miranda–as well as Jeremy Calvert and his girlfriend, Brooke Wehr– enjoying drinks together. Corey included a #LifeAfterLeah hash tag in the caption.

Unlike Miranda, Jeremy Calvert reportedly holds back a bit, and his segment with Leah is reportedly uneventful.

On a side note, Leah brought her rumored boyfriend T. R. Dues with her to California for the taping, but so far there has been ABSOLUTELY NO mention of him, including an after-show interview that Leah recorded while in Los Angeles for the Reunion. Leah has denied reports she and the personal trainer were ever officially dating, and it remains unclear if he will be mentioned at all on the Reunion.

To find out, be sure to tune in to the Teen Mom 2 Reunion Special with Dr. Drew Wednesday night at 9/8c!