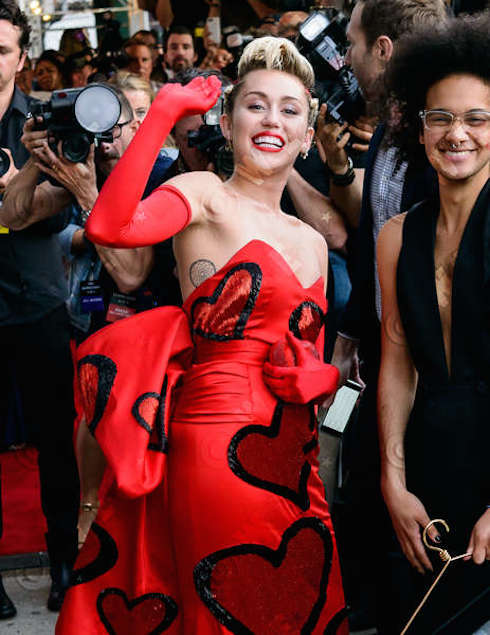 Miley Cyrus took to the stage several times at last night’s amfAR Inspiration Gala. amfAR, an AIDS research foundation, threw the gala to raise money via celebrity auction, and Miley was there to help out with some of her infamous original pieces. (Devotees will recall Miley’s grand unveiling of her artwork last year.)

The pieces below are part of the Caitlyn Collection, an offshoot of Miley’s Dirty Hippie line. And they were doing pretty well–the triptych had received a higher-than-expected bid of $65,000. Where others saw a lot of money, though, Miley Cyrus saw opportunity, and she grabbed the microphone from the auctioneer to literally take matters into her own hands.

“What about $69,000?” asked Miley, trying to drum up support for the figure. “My left boob is bigger than the right–I’ll show you! I’ll clean your house…naked!”

And, sure enough, that was all it took for the winning bid to reach $69,000. Which begs the question: Which of the jeweled Vanity Fair covers do you think is most worth $23,000?

Later on in the ceremony, Miley accepted the foundation’s Inspiration Award, and kept things classy. She thanked a bevy of stars, among them amfAR associates Elizabeth Taylor and Sharon Stone, and got serious when talking about her own Happy Hippie Foundation, which Cyrus wants to use to fight homelessness among LBGT youth.

There are so many people around the world that deserve this recognition. They’ve dedicated their lives to finding a cure for those living with HIV and AIDS, and they’ve used their voices to speak out against the brutal and unfair condemnation and the abominable stigma that comes with this disease. And by receiving this award tonight, I promise to continue to fight along…for a cure for this epidemic.

Later on in the speech, when addressing her parents, Miley became even more emotional:

I just wanna tell you how much I love you, and … I’m gonna f—ing cry like a loser,” said Cyrus, visibly tearing up. “I just wanna tell my parents that I hope that this makes them proud and somehow makes up for all the s–t that I do, all the time. You are two of the most selfless people, and you have taught me and all my siblings how important it is to be there for those who need us and how important it is to care about other people and their lives. So thank you for making me like that.