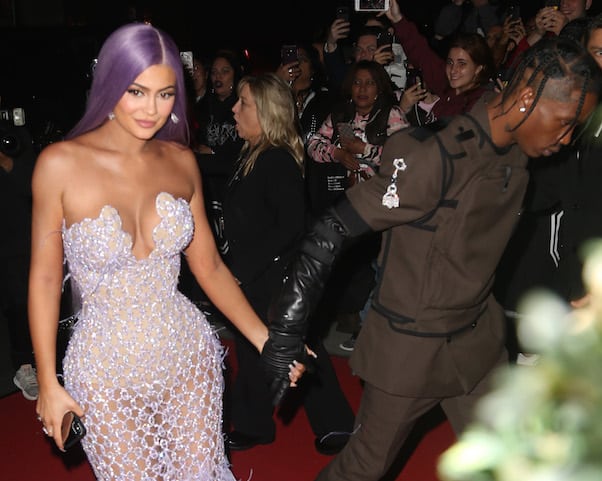 It was around this time last year that we first reported on gossip regarding Kylie Jenner’s apparent desire to give her daughter Stormi a sibling. Just a few months removed from her first child’s birth, Kylie was said to be “craving” a second, along with the In-N-Out Burger she reportedly ate on the regular during her first pregnancy. Now, thanks to Kardashian-friendly outlet People, we have a seemingly innocuous new report on Kylie and Travis pregnant — though nothing in the report itself actually says that Kylie is with child.

Below is the relevant bit from People‘s article, which you can read in full here:

A source tells PEOPLE that the Keeping Up with the Kardashians star, 21, is “very happy with her life” with boyfriend Travis Scott and their 17-month-old daughter Stormi, who has been enjoying a girls’ trip in Turks and Caicos with her mom as of late.

“Kylie loves being a mom and can’t wait to give Stormi a sibling,” the insider says. “Everyone thinks Kylie will be pregnant with her second baby soon. They are trying.”

The source adds, “She and Travis are discussing marriage.”

There’s really nothing new in the article, and its quotes are stretched pretty thinly. The “very happy with her life” bit is really all this article is about; Kylie hasn’t been able to wait “to give Stormi a sibling” for over a year, though of course that hasn’t stopped her going child-free for over a year. “They are trying” just means Kylie and Travis are having unprotected sex. “Everyone thinks” she’ll be pregnant soon makes me think this anonymous insider is someone farther outside the Kardashians’ orbit for an “Exclusive” article (or that it was just a slow news day).

There was more visual “evidence” of a Kylie Jenner baby bump (though “speculative fuel” would be a more accurate phrase) when she appeared somewhat curvier than normal at Travis’ birthday party a couple months ago. And Kylie and Travis have reportedly been planning their $10 million wedding for over a year — plus, rumors that he was about to propose peaked this past February, just before his performance at the Super Bowl. That said, Travis also seems far and away the most stable of any of the Kardashian mates, and he and Kylie’s nuptials are likely more a question of when than if.