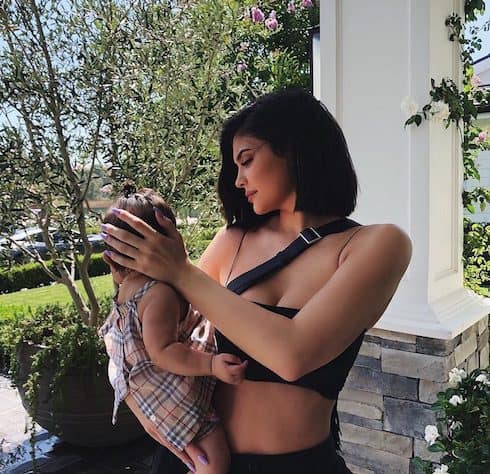 Reports of Kylie Jenner having another baby with Stormi’s father Travis Scott have begun anew. This time, it’s a string of anonymous insiders allegedly close to Kylie’s inner circle who are buzzing about her “signs of motherhood” — which include, among other things, a renewed craving for California’s most famous burgers.

We reported on the first rumors of Kylie and Travis trying for baby #2 back in May, when it was alleged that Kylie wanted another child by Travis to prove that he, and not Kylie’s hot bodyguard Tim Chung, was really and truly Stormi’s father. Shortly after that amusement, Kylie either took down or altered every photo she’d shared of Stormi’s face, after supposedly receiving kidnap threats directed at her infant daughter.

But now it seems that talk of Kylie Jenner having another baby is back on. A new report from Hollywood Life (based in turn on a print-only Life & Style article) claims that Kylie and Travis have a “huge secret to reveal”: specifically, that they’ve been “trying for another baby” since “just a couple of months after Stormi was born.”

Per their insider, Kylie is “eager” to have baby #2, and hopes it’s a boy: “She’d love for her daughter to have a brother to play with sooner rather than later.” Kylie has also been “showing signs of pregnancy” of late; most prominent among these are food cravings, and most prominent among those are “donuts and In-N-Out burgers.” Kylie apparently ate plenty of both during her first pregnancy, you see, and so the fact that she’s reportedly eating them again means she’s probably maybe pregnant again, in theory.

Travis, for his part, “has been seen putting his hands on [Kylie’s] belly recently,” is said to be “doing backflips,” and “can’t wait to spread the news.”

Gossip Cop did its part to rain on this particular pregnancy parade, finding nine separate reasons why the story is literal fake news in a thorough analysis. I’m also wondering why we’re getting news pregnancy gossip and not seeing more stories about Kylie and Travis’ long-rumored wedding. Kylie flashed what sure looked a lot like an engagement ring while driving herself and Travis to Khloe’s baby shower last November. And, during the run-up to the Royal Wedding: 2018 Edition, we did get one bit of gossip claiming Kylie wanted to drop $10 million on her wedding and make it the grandest nuptials of the year.

Other than those two items, though, there’s been nothing about Kylie and Travis’ relationship. And maybe that makes sense. When the $2 million you make every month from Instagram product placements alone is just throwaway money next to your nine-figure fortune, there’s probably no such thing as marriage or new baby pressure. If nothing else, we can safely assume that Kylie has a staff of drivers ready to make an In-N-Out run on 24-hour standby.

(Photo credit: Kylie Jenner having another baby via Instagram)