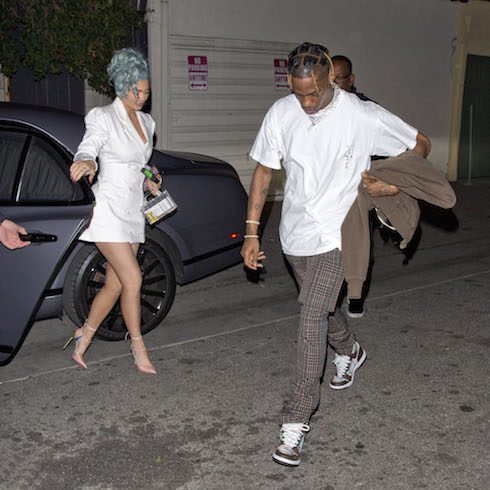 When the NFL announced that Travis Scott had agreed to join Maroon 5 for the Super Bowl halftime show, our first thought — naturally — was that Travis Scott will propose to his baby mama Kylie Jenner at the gig. We were hardly the only people to think this, because Kris Jenner has never met a major moment she didn’t try to take advantage of and the Super Bowl is the major-est moment in the entertainment business.

Now, our optimism is now being supported by professional oddsmakers, who say the smart money is indeed on Travis getting down on one knee during the show. Monster Roster, an “algorithm-driven sports betting service,” is offering a number of prop bets on the game. In case you didn’t know (and if you actively ignore Super Bowl coverage every year, sorry), prop bets are fun, silly bets unrelated to the outcome of the Super Bowl itself. Things like “What will be the result of the coin toss?” and “Will there be another nip slip during the halftime show?” come up every year during the betting extravaganza. Even if you have no interest in or knowledge of the actual game of football, you can make money on the game with a few well-placed prop bets.

According to the betting service, you would do well to accept a wager that Travis Scott will propose to Kylie on Sunday. Monster Roster’s wording suggests a proposal “during the game,” not just during the halftime show itself — but the moneyline for Yes is currently +180, while No is at -220. Moneyline gambling presumes a baseline bet of $100, so, based on the current line, if you were to bet $100 that Travis will pop the question, and he does so, you would win $180. Conversely, if you don’t think Travis will do it, you would need to put up $220 to win $100.

We reached out to Monster Roster to find out exactly how they calculated those odds, and will update the article when we hear back. In any case, given a moneyline like that, it looks like the risky bet is actually whether Kylie will announce she’s already pregnant with her second child after she accepts Travis’ proposal.

Among the site’s other interesting Super Bowl prop bet suggestions for this year: Heads is favored to win the coin toss; Gladys Knight is expected to take over one minute and 47 seconds to perform the national anthem; Knight will neither forget nor omit any words from the anthem itself (“No” is at -500 currently). And the over-under on the total number of songs to be performed at the halftime show itself is 7.5. Travis is going to milk the moment for his proposal, though, so I’d definitely take the under.