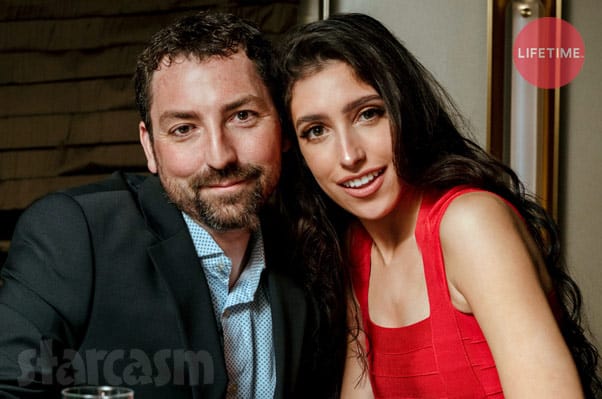 Lifetime’s new economic class-hopping romance reality series Marrying Millions debuted last week, and the Premiere certainly left viewers with a lot of questions. However, no mystery was teased more than the origin story between 23-year-old Rosie and her 39-year-old contractor boyfriend Drew.

During the couple’s introduction on the show, they were both asked in their interview sessions about how they met, and they both completely (and very obviously) dodged the question. “I don’t know, what did she say?” Drew responded.

Rosie then responds with the exact same “What did he say?” Both laughed quite a bit after responding, but producers pressed the line of questioning.

“Did you meet Rosie online?” Drew is asked, as he nervously takes a sip from a bottled water. “You’re picking the wrong rock to turn over,” he answers without looking at the camera.

Rosie, who is back living with her parents after graduating college, says her mom and dad DO NOT approve of her relationship with Drew, and finding out how they met would make things even worse. “I’ve been home for a couple of months,” she explains. “It’s really been kind of a struggle. My parents are absolutely against me and Drew, and that’s kind of been a source of conflict in my house.”

Drew seems a little shocked at the extent to which Rosie’s parents dislike him, and he asks Rosie if there’s something other than just their age. “They probably know you deflowered me,” Rosie points out as Drew nearly chokes on his drink. “And that’s probably why they don’t like you,” she adds after some awkward flirting.

Rosie then expresses her frustration over the tension between her parents and Drew in an interview segment. “I love Drew,” she says. “I want to marry Drew! And I just don’t understand why I can’t have him and my family.” Rosie then adds: “So, my parents have a lot of weird ideas about our relationship. So, if my parents found out how we met, their disapproval would probably get even worse. I will basically lose any chance I have of them accepting the relationship.”

Speculation ran rampant after the premiere, with most everyone assuming that Rosie met Drew via a sugar daddy website. That speculation seems to be reinforced at every turn by Lifetime in promotional clips featuring Rosie talking about Drew buying her things. She even reveals her catch phrase “Come through Daddy Drew,” which is spoken while snapping with both hands:

“All of Drew’s friends refer to him as ‘Captain Save-a-hoe’ because he’s very generous,” Rosie says on the show. “But I am lucky enough to be on the receiving end of that, so come through Daddy Drew!”

In the same scene, she reveals that her parents aren’t the only one who would not be happy to find out how she and Drew met. “My parents and a lot of my friends do not approve of Drew or this relationship,” she says. “They think he’s just some rich guy who just wants some hot young thing on his arm. So, if anybody ever found out how we actually met, it would go from them just disapproving of Drew to a complete disaster.” 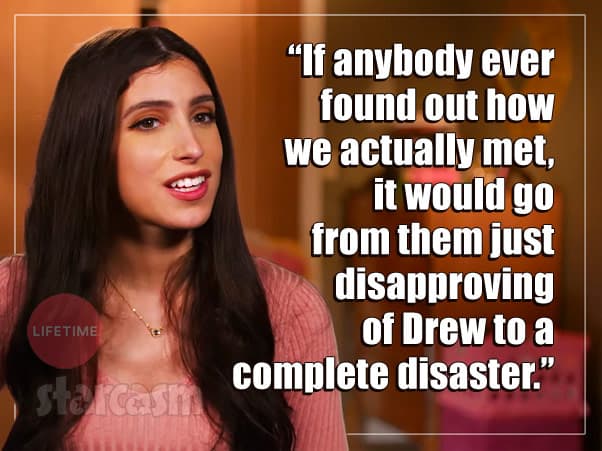 In another clip, Rosie talks a little bit about her first few weeks with Drew. “When I first met Drew, he was willing to bring me to fancy dinners, buy me things, expose me to tons of new experiences, and I really — I fell in love with him.”

So, how did Rosie and Drew meet?

UPDATE – Rosie has since revealed on the show that she did meet Drew on a sugar daddy website! She says she had just broken up with someone else and figured why not? As we mention below, Rosie looks to have been dating a guy named Ethan up until late 2015. It appears that her relationship with Drew began in January of 2016.

If they did meet via a sugar daddy or sugar baby website, they would most likely have created different user names. Plus, they probably would have deleted their accounts at this point. But don’t think I didn’t try to find them!

Although I don’t have an answer for how they met, I do have some more information about Rosie and Drew’s dating history for you. The first photo of Drew shows up on Rosie’s Instagram account back in September of 2017. The picture is of Rosie and Drew in his car wearing similar blue outfits. Among the string of hash tags used by Rosie, she included #boyfriend, #love, #bae, #couplegoals, #lolita and #mercedes (which become important later).

Prior to the first actual photo of Drew, Rosie shared some drawings of a man that certainly looks a lot like him, including this rather unsettling one of a man choking a woman from February of 2017: 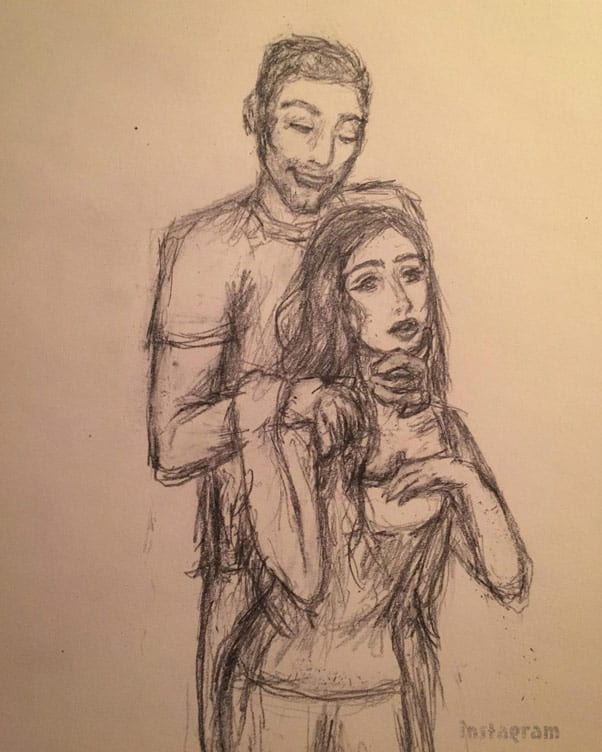 The drawing was accompanied by lyrics from the song “Ultraviolence” by Lana del Rey: “‘Cause I’m your jazz singer, and you’re my cult leader. I love you forever. I love you forever.’ ???✏️.” This post included another long string of hash tags that included #50shadesofgrey, #couple, #romance, #love, #relationshipgoals, #lolita and #vladimirnabokov. (Just in case you weren’t aware, Lolita is a novel by Russian author Vladimir Nabakov and is perhaps the most famous novel ever written about an older man involved in a sexual relationship with a young girl.)

There is another drawing that Rosie shared all the way back in July of 2016 that once again looks like herself and Drew, and once again was accompanied by Lana del Rey lyrics: 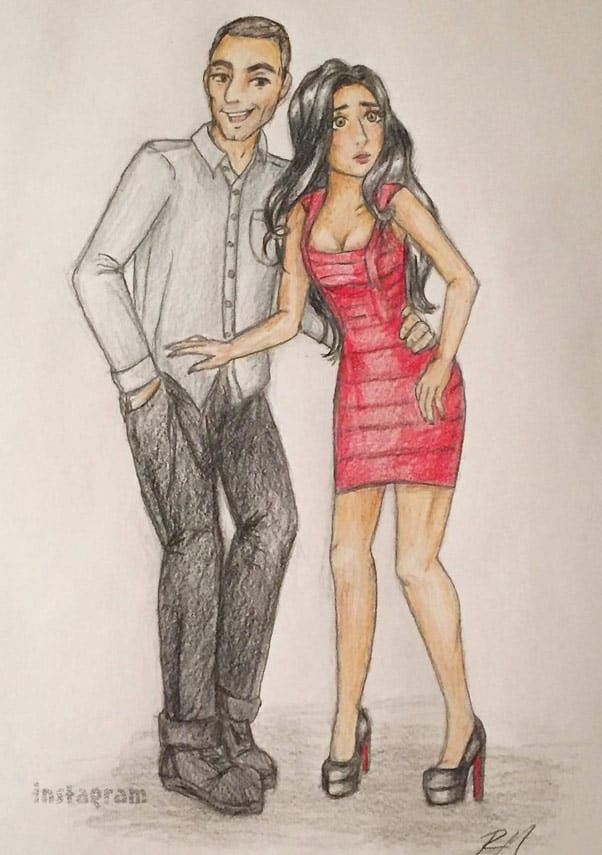 “‘He said to ‘be cool’, but…I don’t know how yet.’ ??????” Rosie captioned the image, along with a shorter string of hash tags that didn’t mention anything about love or being in a relationship. So, if that is Drew that she drew (heh heh), then it must have been very early in their relationship.

That speculation seems to line up with a one-year-ish anniversary post she made in February of 2017. The picture is of a rose in a vase on the table at a restaurant. You can see a man’s arm in a long-sleeved shirt, but there’s no way to know if it is Drew or not. Here is Rosie’s caption:

Rewind one year. I had only seen you in person 3 times prior, but I’m convinced you dropped half a grand on me in that one weekend. You’re insane. But wasn’t I as well? In the clarity that followed, we both know that it would have been worth any sum. I’d wager my life on this night. For the dowdy wall-flower, I was no longer. I was a brilliant rose, suspended momentarily in Dali surrealism. There at that table, I was a glamorous socialite, you, a high-powered business man, and everyone stole glances out the corners of their eyes, to look at the young woman in the red dress. ????.

So, if this is Drew that she is talking about (which seems to be the case), then that means that on Valentine’s Day in 2016 they had seen each other in person three times already. So, I’m thinking they first met right around the first of the year in 2016? That also lines up with the fact that Rosie appears to have had another boyfriend named Ethan until very late 2015.

If you go back to the second and third photos posted on Rosie’s Instagram account, which was in March of 2016, you will see the same Mercedes interior from Rosie’s February, 2017 photos. Rosie is showing off her nails in the 2016 pics, and she adds the hash tag #armcandy.

In June of 2016 she was once again dropping hints suggesting she and Drew — or another older man — were dating. On Facebook she posted a photo holding lipstick and captioned it by writing: “Kat Von D’s ‘Lolita II’, long-lasting and the perfect color for going out with men twice your age. ??? …hypothetically of course ??.” At the time of that post, Rosie was 21 and Drew was 37.

If you are curious about how the couple wound up on the show, they have been quite open about it. Both Drew and Rosie say that she was contacted by producers initially, perhaps because of her hash tags? Drew didn’t want to be on the show, but after months of Rosie pushing him, he finally agreed.

Too find out if Rosie and Drew eventually share the real story of how they met, be sure to tune in to new episodes of Marrying Millions airing Wednesday nights at 10/9c on Lifetime.