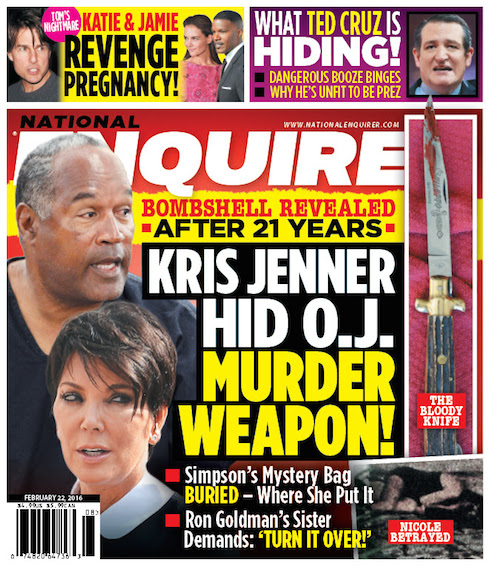 Of course, most of the Kris Jenner OJ Simpson rumors deal with the possibility that the pair might have had some sort of a romantic entanglement, potentially, and that Khloe Kardashian was the result. Khloe regularly dismisses related rumors, including one from just last month which stated that she’s had “extensive” plastic surgery in order to “look less like her biological father.”

The current Enquirer addition to the Kris Jenner OJ Simpson canon, though, claims that Kris is still dealing with “guilt over the infamous slayings”–guilt she apparently confessed to feeling in a new documentary. According to the publication’s source, “Kris knew there was a lot to lose if she was sworn in under oath and put on the witness stand,” since she “helped to hide the bloody knife” that OJ used to carry out the double murder.

In addition, the Enquirer alleges that “even more evidence could have been hidden away” in Robert Kardashian’s home, and that hiding the weapon was all part of Kris’ plan for an “ultimate betrayal [of] her dead best friend” Nicole.

The National Enquirer has yet to follow up on its late September claim that beleaguered former comedian Bill Cosby had his son Ennis murdered in 1997.

Was Tom Cruise secretly taped during Scientology confessionals as a joke?