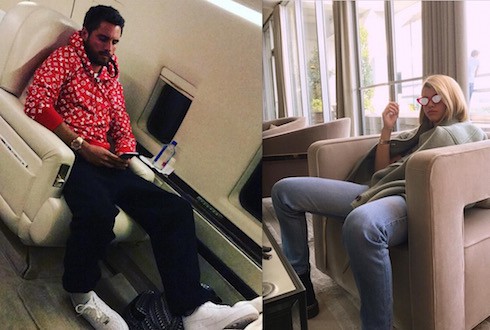 It’s usually pretty easy to tell what’s going on in Scott Disick’s head: some combination of sex and money, possibly in a Scrooge McDuck throwback loop. But the last few days are turning out to be a real puzzle, because it’s now entirely possible that we’ll soon get official confirmation of Scott Disick and Sofia Richie engaged.

Last week, it was widely reported that 34-year-old Scott had decided to end his Sexual Revenge Tour against estranged partner Kourtney Kardashian by settling into a relationship with 19-year-old Sofia Richie, daughter of Lionel Richie and at least the third teenager Scott had banged on the regular since summer began.

Then, three days ago, Scott and Sofia went public with an eye-rollingly awkward display of well-documented PDA. It seemed pretty clear that the two of them had hired paparazzi working in shifts to cover their every move as they made out on the beach behind their hotel, held hands while shopping at boutiques, and sat outdoors, in the sun–it was 85 degrees in Miami on Thursday–while lunching on salad (who sits in the sun for salad?) with various undisclosed “friends.”

Misspelling of “Sophia” aside, that chocolate script most definitely spells out Congratulations for the couple. And the only reasons that people ever get chocolate scripted desserts is to celebrate an anniversary (clearly not the case here, unless they want to champion making it 24 hours together), a pregnancy (…), or an engagement. (*Or* a really dull joke. It could also be that.)

According to photo service Splash News, there is a very simple alternate explanation: the two got their shared dessert in honor of “making their relationship ‘Instagram Official,’ posting pictures of each other together on both of their Instagrams.” However, that is most definitely 100% nonsense. We reported on Scott and Sofia’s overly public display of affection in Miami two days ago; since then, this photo, of Scott looking at his phone pensively, is the only one he’s added to his Instagram page; and this photo, of Sofia looking at her phone with a bizarre mix of vapidity and terror, is the only one she’s added. No other blogs are reporting any post-and-delete activity on either Scott or Sofia’s part.

To be fair, celebrating going “Instagram official” does sound like something two giddy, naïve high school students would do, and Scott Disick’s actions are often on par with those of a high school boy. But that’s as much of this notion that we can allow. (Sofia gets a pass because she is the age of a high schooler who got held back a year.)

It’s far more likely that Scott, who is by all accounts way on the outs with every single female Kardashian right now and still smarting over that, heard about Kylie Jenner’s little bundle of joy and decided he would return fire with some headlines of his own. He pulled lower-scale stunts often late in 2016 when Kourtney shunted him aside in favor of Justin Bieber hookups, and again earlier this year after getting kicked off the Costa Rica tour for trying to sneak a friend with benefits into the country. It’s hard to see what Scott’s endgame is, but his play seems obvious.

Nevada lawmaker Michele Fiore says cancer is a ‘fungus,’ can be cured with salt water

PHOTOS Did Kourtney Kardashian and Scott Disick break up? He’s pictured getting cozy with an ex