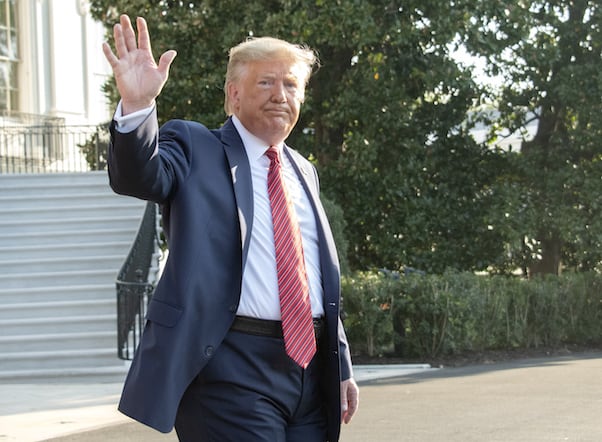 JEZEBEL – In the middle of the whistleblower’s memo and subsequent impeachment drama comes what sure looks an awful lot like the real Trump pee tape. We say “looks like” because it turns out it’s likely a very high quality fake; your willingness to believe in the tape’s authenticity is directly related to how much you want to see grainy footage of women peeing on each other while Trump sits on a nearby chair

VOX – About that whistleblower: It turns out a still-anonymous US intelligence official claims s/he has tea on Trump trying to do some crimes with the president of Ukraine, and that White House officials then tried to cover up the doing of those crimes

THE ASHLEY’S REALITY ROUNDUP – There’s a reason Kylie Jenner wasn’t with Kendall and Kim at the Emmys last weekend: she was under the weather and has apparently now been hospitalized for “flu-like symptoms”

CELEBITCHY – “How close is Netflix’s Unbelievable to the true story?”

DLISTED – Kim Zolciak let her five-year old daughter Kaia Rose wear full makeup, then shared a photo of Kaia on Instagram, and then got a bit huffy when several people slammed her in the comments, hmmm

THE BLAST – Speaking of Real Housewives, it seems Dorit Kemsley’s money problems are far from over: she’s being taken back to court in relation to her husband’s $1.2 million (alleged) debt

THE BLEMISH – That interview Jennifer Lopez gave to Movieline in 1998 has gone viral again, probably because she shit-talks a ton of A-listers and generally acts like she has Meryl Streep’s résumé and Cardi B’s cred

GO FUG YOURSELF – If you still haven’t gotten enough of the fashion from the 2019 Emmys, now’s your chance to vote in the only other fashion poll that matters: The worst-dressed celebs from Sunday night

LAINEY GOSSIP – Princess Beatrice is engaged to Edoardo Mapelli Mozzi; enjoy them here looking googly-eyed at one another, and also on a boat