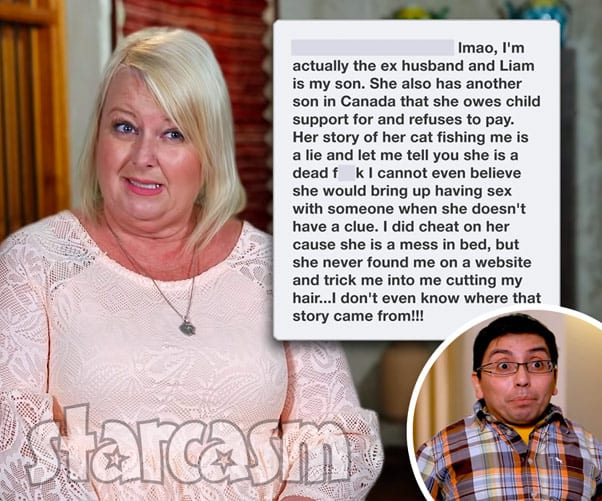 It has been a rough couple of weeks for 90 Day Fiance: The Other Way star Laura Jallali. Soon after she seemed to be caught in a lie about currently being pregnant in an attempt to get Aladin to unblock her, her ex-husband is speaking out against her with all sorts of unflattering accusations!

Laura’s ex is named AnDre and he is the father of Laura’s sons Liam and Aiden. The posts I will be referencing are from Facebook, and I want to state up front that the Facebook account does belong to Liam’s father. I’ve also tracked down AnDre’s Instagram and Twitter accounts, and they include numerous older photos of Liam and his brothers. (AnDre has three sons, one of which is not Laura’s.)

UPDATE – It is now being reported by a reliable source that AnDre is not Liam’s birth dad. That was reportedly a “Spanish man” that Laura met while in Florida that “picked up and left” just a few weeks before Liam was born. Click here for more info on that, as well as A LOT more about Laura’s rather unconventional life story! Plus, see her controversial black eye photo and read the alleged text messages that she wrote claiming that Aladin is gay! Oh, and that is Laura’s friend Ludwing inset in the photo above, not AnDre. Apparently that was causing some confusion.

In addition to verifying that this is in fact Liam’s dad making these claims, I also cross-checked the information with an AMA that Liam did on reddit back in July, and everything seems to check out. I will first summarize all of what AnDre and Liam stated, then I will include AnDre’s comments in their entirety.

Laura became pregnant with Liam 22 years ago. AnDre says Laura was working illegally in Florida when she gave birth to Liam in Jacksonville — that’s why he has dual US and Canadian citizenship. (The timeline is lacking a little bit here because it isn’t explained why Laura got pregnant, then went to Florida, then went back to Canada and AnDre.) [This has since been explained — see update above.]

Not long after giving birth to Liam, Laura and he returned to Canada. Liam’s brother Aiden was born there three years later.

Laura, Liam, and Aiden remained in Canada for 15 more years before Laura took them both to Michigan. Laura got Liam a personal support worker job with a friend of hers that owned a retirement home. The three of them stayed in Michigan until Laura and the owner of the retirement home had a falling out two years later.

Laura then got Liam a job in Florida and relocated there. At this point, Aiden decided to return to Canada and live with his dad. (AnDre didn’t state it that nicely.)

AnDre says that Liam supported Laura in Florida with his job as a CNA at an assisted living home. Liam seemed to confirm that (for the most part) on reddit by stating his mom “helps me with some things but I pay mostly all of the bills.”

There have been reports that Aladin asked Laura for a divorce during the “Couples Tell All” taping, and AnDre claims it is a done deal. “Laura is already divorced from that dude and living in Equador for whatever reason,” he says. As we previously reported, Laura is currently in Ecuador with her The Other Way co-star Evelin. (I’m not sure how the divorce process works in Qatar or Tunisia, but I find it hard to image that it is already finalized?)

AnDre adds that when Laura went chasing after Aladin, she was officially deported from the United States. 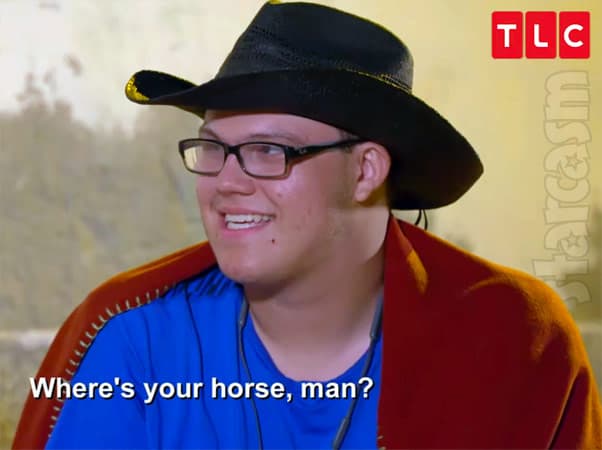 Here are the comments made by AnDre over the past week, beginning with his defense of Liam after last week’s episode in which he confronted Aladin:

Just wanted to set things straight. To anyone that says Liam is dumb or disrespectful. Or has mental problems. You people are dumb as sh*t. For one thing, Laura was living off Liam in Florida. He made the money and supported the household. So he does not want money from her because she is as broke as f**k. Another thing is he was not rude to that dude, TLC cut and spliced film to make it look like he was disrespectful so all you idiots could talk about it like this. Laura is already divorced from that dude and living in Ecuador for whatever reason. You can’t fault a kid for loving his mom and wanting what’s best for her. You don’t know what he has gone through with all the red neck f**ks she has dated. Trust me, Laura is a crazy mess and Liam is a very level headed intelligent kid. I know this because he is my son!

I’m actually the ex husband and Liam is my son. She also has another son in Canada that she owes child support for and refuses to pay. Her story of her catfishing me is a lie, and let me tell you she is a dead f**k. I cannot even believe she would bring up having sex with someone when she doesn’t have a clue. I did cheat on her because she is a mess in bed, but she never found me on a website and trick me into me cutting my hair…I don’t even know where that story came from!!!

She is a evil woman trust me on that.

COMMENT: Why would she have to pay child support isn’t that child older?

He is 19 but he has been with me since he was 17 and he was going to college. The way the laws work in Canada if the child in under 25 and still in school you pay child support.

She never helped to pay for tuition or anything for him. I had to get braces for him when he came back with me cause she never took care of the boys, and then she refused to pay for half the braces.

#90DayFiance #TheOtherWay Is Laura pregnant with Aladin's baby like she claimed last week? Get all the latest, including her recent Instagram live session from Ecuador with Evelin! Plus, drama with another female co-star who thinks Laura is lying! https://t.co/b0E0SarPu3

She worked illegally in Florida and got prego 22 years ago with Liam, that’s how Liam is in Florida because he was born there. She is Canadian. She just got deported from the States when she just left to be with this guy.

5 years ago, Laura basically kidnapped my 2 kids and moved to Michigan. Aiden is our kid together — he is 3 years younger than Liam. So in Michigan she got Liam a job as a PSW from a friend that owned a retirement home. 2 years later she had a falling out with the guy that owned the home and she got Liam a job and moved to Florida. After that move, my youngest son figured out that his mother was a Wack job, moving all the time never in any stable place, so he came back to live with me since he wanted just a stable place to finish high school.

Laura has yet to respond to her ex’s allegations as she continues to relax in Ecuador. Her most recent Instagram post seems to be addressing the negativity she has been receiving this week, but it’s unclear if it is directed at AnDre specifically. “Don’t worry when people put you down or talk behind your back,” the text graphic reads. “Those people have a need to find fault in your life, because they can’t fix the faults in their own. Use that energy to propel you forward.”

To follow along and watch Laura and Aladin’s relationship implode on screen, be sure to tune in to new episodes of 90 Day Fiance: The Other Way airing Monday nights at 9/8c on TLC.

Thanks to Instagrammers @talker_of_?s_ and @johnyates327tv for their hard work!

THE OTHER WAY Aladin says Laura catfished him, has a drinking problem, was kicked out of US, and more!