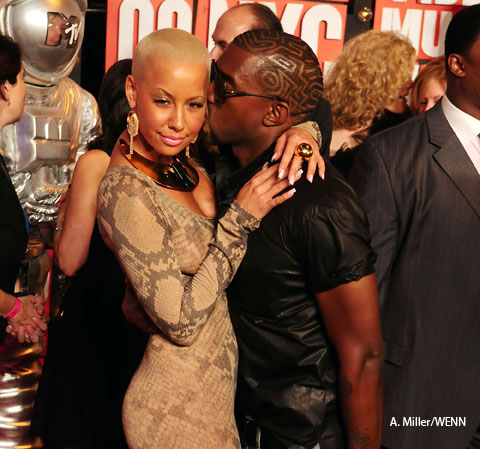 On this morning’s Power 105.1′s The Breakfast Club Kanye West joked that he needed to “take 30 showers,” after dating Amber Rose before he could be with wife Kim Kardashian. “She’s just soaking in the moment,” West said of Rose. “If Kim had dated me when I wanted, there would be no Amber Rose.”

His comments didn’t come out of nowhere, though. Amber has been in a feud with Kyle Jenner and Khloe Kardashian over Kylie dating Tyga. Amber’s best friend is Blac Cyna, who is the mother of Tyga’s baby.

“Kylie’s a baby,” Rose told The Breakfast Club last week. “She needs to go to bed at 7 o’clock and relax. It’s ridiculous. Tyga should be ashamed of himself. That’s how I feel, for sure. He has a beautiful woman and a baby that he left for a 16-year-old who just turned 17.”

Kanye even addressed Amber’s claims that Kim was sending him photos while he was in a relationship with Amber, and that he even cheated on Amber with Kim. “It’s very hard for a woman to want to be with someone that’s with Amber Rose so she wasn’t sending nothing,” he said.

Is there a Kardashian family church? Religious endeavors raise eyebrows