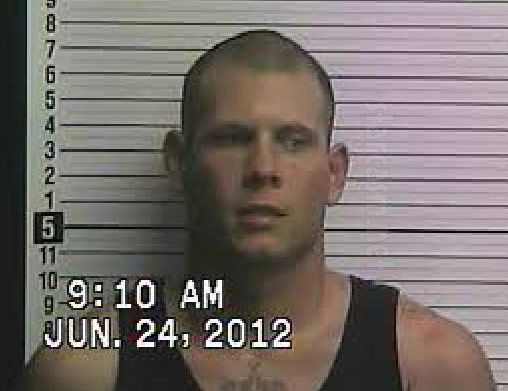 After reporting about the possibility and then confirming the arrest of Jenelle Evans and her ex-fiance Gary Head over the weekend here is the latter’s mug shot.

Head was arrested for Possession of Marijuana up to 1/2 OZ, Possession of Drug Paraphernalia, Assault on a Female and Simple Possession of a Schedule IV Controlled Substance. Starcasm exclusively spoke with Gary’s bondsman earlier and he stated that Head’s platoon commander came to court to collect Gary which may have attributed to what was a low bond of only $1,000.

Jenelle’s mug shot came across the wire earlier and as it usually goes with a Jenelle fallout this is one big, hard to keep up with mess of a situation. She’s been tweeting about what allegedly happened on Sunday and so has Gary. Radar has a report from a “friend of Jenelle’s” claiming :

“Gary beat the sh*t out of Jenelle. He strangled her with a bed sheet. When the cops arrived they asked Jenelle what happened, and if she hit him and she told them, ‘F**k yeah I did, I hit him back.'”

Jenelle did tweet out that story, which one would assume is an endorsement by Evans of what this friend claims happened. Here’s what Jenelle’s had to tweet, at least up until this post: 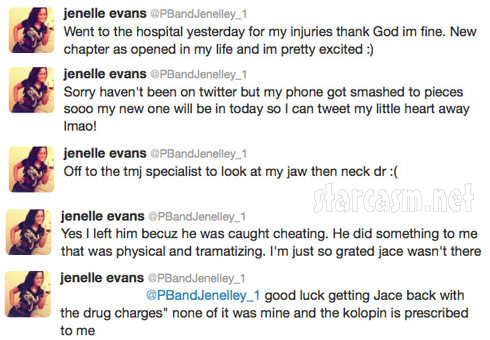 Here’s a statement her lawyer made to Rumor Fix:

She was charged with it but it was not in her possession,” says Sullivan. “It was not found on her. She was definitely assaulted. She is extremely fearful right now of Gary.

“Jenelle’s the one who called the police that night, several times. We are still trying to find out exactly what happened. She was not drinking at all, and the incident happened at Jenelle’s apartment. She’s really shaken up right now.”

As for Gary, well he retweeted a message from someone who stated the they were present when the altercation happened and that the source Radar used wasn’t:

All of this is sad, bad and disappointing. Jenelle was finally off parole but hopes of regaining custody of her son Jace could be jeopardized and as for Gary, he’s a Marine and they’re supposed to have a strict code of honor. Nothing I’m reading here seems to exemplify that calling.

Luckily, Jace was not at Jenelle’s apartment when the fight happened.

Jenelle has a court date scheduled for July 30th.