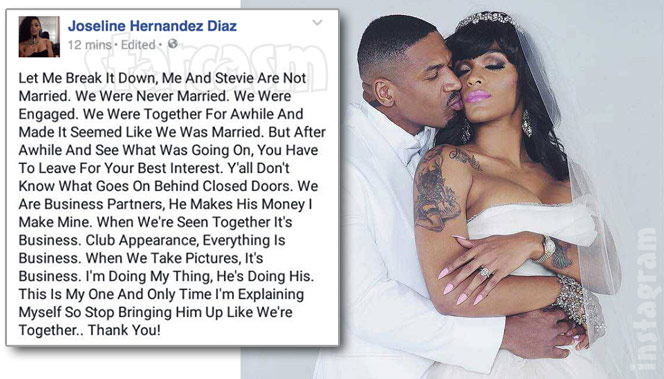 Love & Hip Hop Atlanta truthers may have reason to rejoice as show star Joseline Hernanadez appears to have FINALLY confirmed what has been rumored for years: her marriage to Stevie J was fake!

The confirmation came in form of a Facebook post made by Joseline, which she later deleted. “Let Me Break It Down, Me And Stevie Are Not Married,” Joseline reportedly wrote. (I’ve honored her use of capital letters at the beginning of every word.) “We Were Never Married,” she continued. “We Were Engaged. We Were Together For Awhile And Made It Seemed like We Was Married.”

Here’s an image of her post followed by the full text: 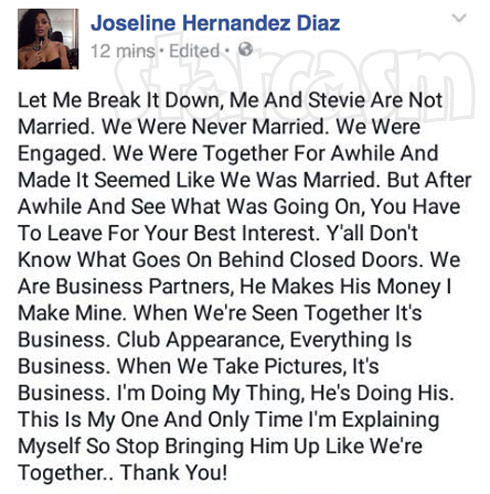 Let Me Break It Down, Me And Stevie Are Not Married. We Were Never Married. We Were Engaged. We Were Together For Awhile And Made It Seemed like We Was Married. But After Awhile And See What Was going On, You Have To Leave For Your Best interest. Y’all Don’t Know What Goes on Behind Closed Doors. We Are Business Partners, He Makes His Money I Make Mine. When We’re Seen Together It’s Business. Club Appearances, Everything Is Business. I’m Doing My Thing, He’s Doing His. This Is My One And Only Time I’m Explaining Myself So Stop Bringing Him Up Like We’re Together. Thank You!

UPDATE – We are being told that despite the huge following on the Joseline Hernandez Facebook page, Joseline is not officially connected to it. Sooooo…the fake marriage rumors are still just that: rumors.

The “Joseline and Stevie J marriage is fake” rumors have been circulating ever since it was first reported the two got married back in July of 2013. The most adamant non-believer was Stevie J’s ex, Mimi Faust, who has continued to insist the marriage was a sham after she reportedly first got the scoop from Joseline’s former friend and booking agent named Dawn. Even VH1 reported on the rumors back in July of 2014 with a list of evidence for both arguments.

However, the network’s doubts about the validity of the couple’s nuptials didn’t stop them from giving them their own spin-off show titled Stevie J & Joseline Go Hollywood.

So what do you think — is it a big deal that Joseline Hernanez and Stevie J faked their marriage for “business” reasons?