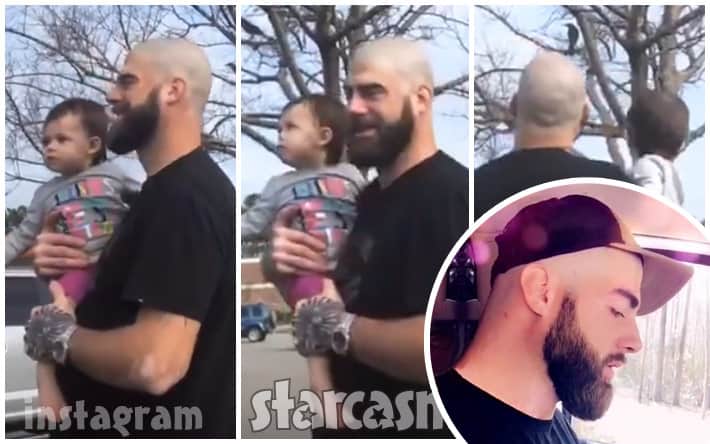 One day after being fired from Teen Mom 2 by MTV, Jenelle Eason’s husband David Eason returned to social media in a series of video clips in which he could be seen shaving the side of his head in a mirror. David returned to Jenelle’s Instagram feed today in another clip with daughter Ensley in which it is revealed that David didn’t just shave the sides, but went full-on skinhead by shaving everything but his beard and mustache!

Meanwhile, things are reportedly tense on “The Land” as MTV producers continue to discuss whether or not they will also be firing Jenelle from Teen Mom 2. A source tells The Ashley’s Reality Roundup that Jenelle is genuinely worried that she will not be asked to come back to the show. “Everyone from MTV was freezing Jenelle out after this happened, which made her even more worried,” The Ashley’s source says. “No one from MTV would even return her texts or calls.”

Although MTV’s announcement that David had been fired from the show was very concise and came the day after his anti-LGBTQ Twitter tirade, it didn’t come about until after they tried very hard to save David’s job. From The Ashley’s source:

[Producers] were on the phone with [David], telling him to apologize and try to make it right, but David would not budge. He kept repeating that those are his beliefs and he doesn’t have to apologize for what he said because it’s true. I think that’s when the producers knew they couldn’t write this one off. They issued the statement later that night, right after that phone call with David. Jenelle was shocked.

Despite being shocked, Radar Online has a source that says its not just MTV that may want Jenelle’s time on the show to come to an end. “Jenelle wants to quit the show because she says David is her husband and she has to support him,” their source says. “She said that she was a team with David, but she’s also sick and tired of all of the negativity that gets put out there about her. She feels so hated by all of the other girls.”

Jenelle affirmed that she is standing by her man earlier today with this Instagram photo holding David’s tatted hand along with the message: “Forever & Always, I love you:” 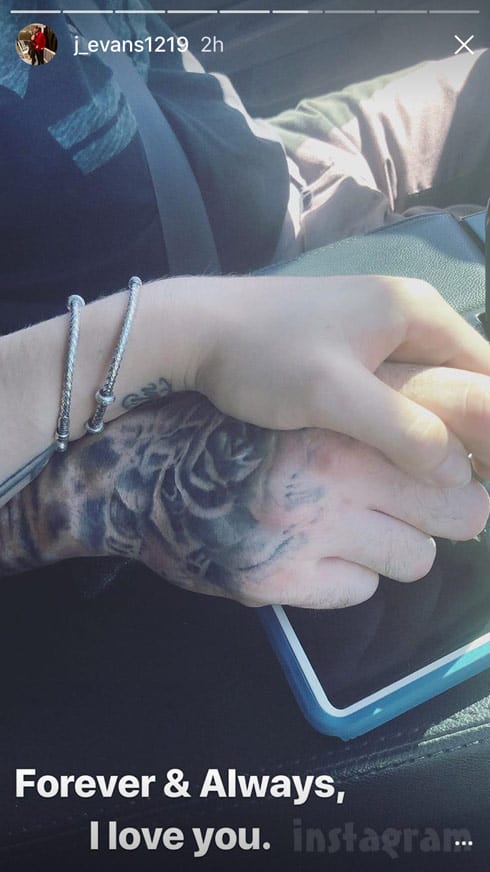 Regardless of who wants Jenelle gone the most, MTV has reportedly stopped filming her altogether until a decision is reached on her future with the network. It’s unclear how they would handle keeping Jenelle on the show without David, especially since The Ashley says “there are several members of the show’s production/crew who have stated that, if Jenelle continues on the show, they do not want to go back out to Jenelle and David’s home on ‘The Land’ due to this incident.” And something tells me that even if David “allows” Jenelle to remain on the show, there is no way he would let an MTV camera crew back on The Land.

As soon as I read David’s tweets I knew that if he didn’t try some sort of “my account was hacked” stunt that he would be fired from the show, but I assumed that MTV would figure out some way to keep Jenelle around. But, Jenelle’s TERRIBLE statement and nonchalant social media posts since the firing have me leaning toward a 65%ish chance that she is done too.

One big question I have is about their contracts. If MTV lets Jenelle go, is she free to do another reality show on another network? I think I recall there being some sort of time period clause? David is such a nuclear hot potato that I don’t think other networks would be willing to include him, but I could imagine another network picking up some sort of Babs and Jenelle project — especially if it were one of those therapy type shows. (Jenelle was set to appear on one of those shows before, but that got nixed thanks to a combination of Jenelle finding out she was pregnant and producers really wanting her sister Ashleigh to be on as well.)

One thing’s for sure, I would love to be a fly on the wall for the Teen Mom producer meetings this week!

Stay tuned, because if MTV decides they are going to fire Jenelle, I assume they will want to do it quickly.