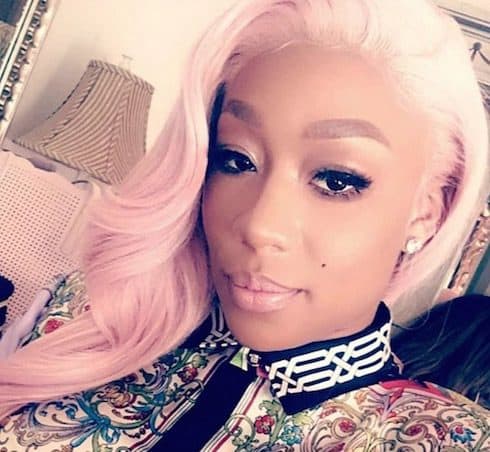 The Dimepiece’s due date is getting closer, which means there’s a whole lot of new Jessica Dime baby bump pics to see! The Love & Hip Hop Atlanta star is allegedly expecting her first child with fiancé Shawne Williams a *lot* sooner than we expected — as in, potentially before the end of the end of LHHATL Season 7!

Though Jessica didn’t officially confirm her pregnancy until the third episode of Love & Hip Hop Atlanta‘s current season, rumors about her pregnancy had been swirling for weeks. We first reported on the gossip a couple of months ago; at the time, our source said that Dime was apparently “at least halfway to her due date if not more,” and there was a chance she would give birth before the reunion special this summer.

Since then, Dime has abandoned her temporarily quiet persona and stepped back onto social media. She shared the first official Jessica Dime baby bump pic shortly after her pregnancy reveal, on what turned out to be the day of she and Shawne’s well-documented baby shower:

God’s Plan ?? Photography by the one and only @fbstudios

As for that shower, Dime made sure to share plenty of live updates on Snapchat, and most of those were preserved by her ardent fans. Here’s a small sample of what went down at Jessica and Dime’s celebration, via The Shade Room:

Then, just last week we got another official Jessica Dime baby bump pic, again courtesy of her preferred photographers at FB Studios. In the second photo, Dime dropped the semi-sour look she sported in the first image above, instead favoring a more glamorous, almost otherworldly feel. (Hopefully her pregnancy is as smooth as this pic makes it look!)

As for Jessica and baby daddy Shawne, it looks like their wedding plans are still on hold for the time being. The two got engaged back in April of 2017, not long after taking their relationship public following the leak of their sex tape. Apparently, LHHATL Season 7 was originally supposed to feature a wedding special for Dime and Shawne, but those plans got axed after VH1 won the right to air Cardi B and Offset’s nuptials.

Dime was said to be pissed over the cancelation — but that news also came right around the time she found out she was pregnant. So it’s possible that the whole thing is water under the bridge at this point. (I refrained from making a “pregnant woman’s water breaks” joke in that sentence, but you should feel free to do so 😉 )

We’ll wrap up this Jessica Dime baby bump update with a few more pics from the last few weeks, courtesy of the good people over at @kingjessicadime:

"I was meant for you and you were meant for me, yeah And I'll make sure that I'll be everything you need, yeah Girl the way we are is how its gonna be Just as long as our love don't change for one another." #DontChange #musiqsoulchild Its them against the ? #blacklove Luv dem together Living life, Having fun #Strictlyforthestreets #MemphisNationWide #jessicadime #teamdime #trapdime #ThatBitch #KingofMemphis

@iamdimepiece at her beautiful baby shower

Love & Hip Hop Atlanta Season 7 airs Monday nights at 8 on VH1. The current season is believed to be eighteen episodes long — not counting the still-to-be-filmed reunion special — and is expected to run through to the end of July.

MUG SHOTS Why isn’t Tommie on LHHATL for Season 8?