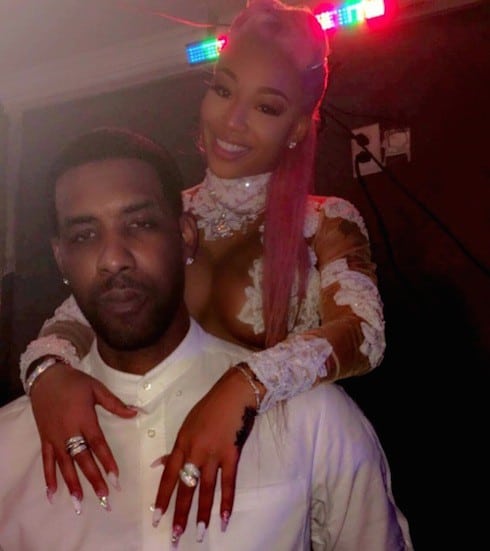 Jessica Dime may be dating Alexis Skyy on Love & Hip Hop Atlanta Season 6, but savvy viewers know she’s really been with former NBA player Shawne williams for months. The two were outed as a couple last fall, when clips of Jessica and Shawne’s sex tape were leaked (possibly to set up a storyline involving the leak for later this season).

The couple went quiet for awhile–but in the ramp-up to the season premiere, the Dimepiece chose to fade the haters and declare her love for Shawne where everyone could see it: on her Instagram page, of course 🙂 Jessica started sharing photos of Shawne and captioning them with things like “#MYSOULMATE.” And Shawne followed suit; this past Valentine’s Day, he captioned a shot of the two of them with “If you live to be a hundred, I wanna live to be a hundred minus one day so I never have to live it without you.”

Well, now the pair can bicker over who gets to die first until one of them actually does–because Jessica Dime went and got herself engaged to Shawne this past weekend!

RELATED: Who is Jessica Dime dating? She goes public with her love for former NBA player Shawne Williams

The LHHATL star actually deleted her first engagement ring update, which does seem kind of strange. Since the rise of social media, no celebrity has ever shared and then deleted any big news or controversial viewpoint or anything else worth gossiping over without at least a fan or two snagging the post and spreading it around for the rest of the world to see. And it’s not like Jessica has anything to be ashamed of with her simple ring clip–she’s definitely not embarrassed about the size of the ring 😉

Here’s the original clip, courtesy of The Shade Room:

And here’s the most recent picture of Jessica Dime and Shawne Williams together, which Dime herself shared. She may have deleted the engagement ring reveal photo in close-up form, but the ring is still visible on her hand in the photo below:

In fact, judging by the date that photo was uploaded and the fact that Jessica chose the ocean as a backdrop for her engagement ring, it looks like Jessica actually brought Shawne with her to Jamaica for what’s supposed to be a ladies-only LHHATL retreat. Shawne may or may not appear in front of the cameras later this year, but it’s likely that we’ll get at least a reaction to the news of Dime’s engagement later this season. Until then, congrats to the happy couple!