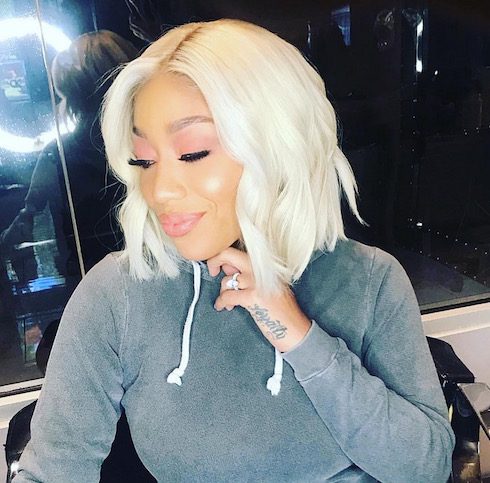 LHHATL star Jessica Dime has been engaged to former NBA forward Shawne Williams for a year, and now it appears that the two of them have been up to more than just wedding planning. Gossip about Jessica Dime pregnant has been making its way around social media for days, in advance of the Love & Hip Hop Atlanta Season 7 premiere.

Noted tea spillers Best Reality Blog were the first to make the claim. According to their initial take, Dime and Shawne are “expecting their first child” sometime later this year:

Looks like the Love and Hip Hop Atlanta cast is growing! Fan favorite @iamdimepiece is expecting her first child with fiancé @shawne_williams1 !!! Are you excited for Dime? I am!! #Comment and tell her congrats!! ????? #LHHATL #LHHH #loveandhiphopatlanta #jessicadime #lhhny #lhhmiami #vh1

And a later update offered more details. Dime is likely “at least halfway [to her due date] if not more,” the site reported, and “might even have her baby on the show this season.”

Though an in-season birth is certainly possible, Dime would probably have to be in or very close to her third trimester for that particular timing to work out. LHHATL Season 7 is expected to end in early to mid-June, before Love & Hip Hop Hollywood takes over for the summer months.

But, for the skeptical among you, we’ll point out that BRB is generally one of the most reliable sources of Love & Hip Hop gossip. Among other tea, they were first up with spoilers from the LHHATL reunion special last year, and got the real story behind Masika and Hazel-E’s “hella fake” brawl.

Plus, it might be worth nothing that both Jessica Dime and Shawne Williams have been updating their Instagram feeds far less often than they were a few months ago. It’s not conclusive evidence for Jessica Dime pregnant, but keeping the pregnancy secret for LHHATL Season 7 would help explain the downturn.

Finally, we did just get a huge tease in the form of Jessica Dime’s pregnancy test in the Season 7 supertrailer.

Whether you believe that Dime is pregnant or not, we don’t have to wait long to find out: Love & Hip Hop Atlanta‘s new season premieres this Monday at 8 PM on VH1.

PHOTOS Old Kate Gosselin had a farm…and took the kids!

Kylie and Tyga set a date to elope