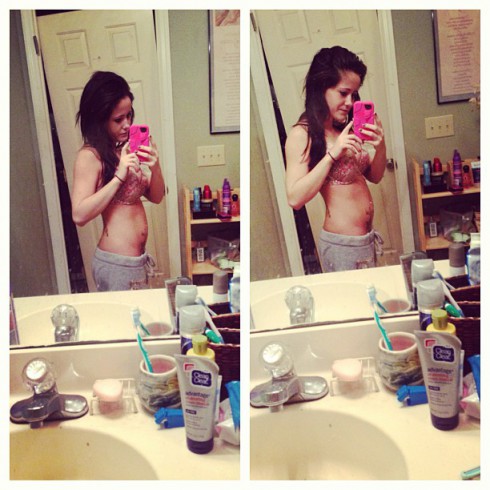 In case you’ve been trapped in an elevator without internet for the last 36 hours, it was announced early yesterday that Teen Mom 2 star Jenelle Evans is pregnant with her second child. Her husband Courtland Rogers broke the news to Star magazine, revealing that his wife of just about six weeks is just about six weeks along.

The news caused a deluge of responses ranging from congrats to accusations the pregnancy was fake and done just to make money from selling the story. Seemingly in response to the latter, Jenelle spoke to MTV on the phone last night and confirmed the pregnancy herself. (It is assumed she was unable to sell the story because of her MTV contract, but Courtland was not under the same restrictions. Leah Messer and Jeremy Calvert did something similar last January when Jeremy gave an interview to the now-defunct Reality Weekly announcing Leah was pregnant.)

“I missed a few birth control pills, and found out I was pregnant at a doctor’s appointment. I was really surprised,” Jenelle tells the network. “I know a lot of people will say we’re not ready, or judge me from my past. I want to prove to everyone that I can do this,” she continues. “This wasn’t planned, but it happened so we’re taking it as we go. Courtland and I are happy and excited now. We have our own place, we’re married, and we’re both working. We know having a child can be difficult, but we’re going to do our best.”

Then, today, Radar Online published two of Jenelle’s sonograms as further proof her pregnancy is real. 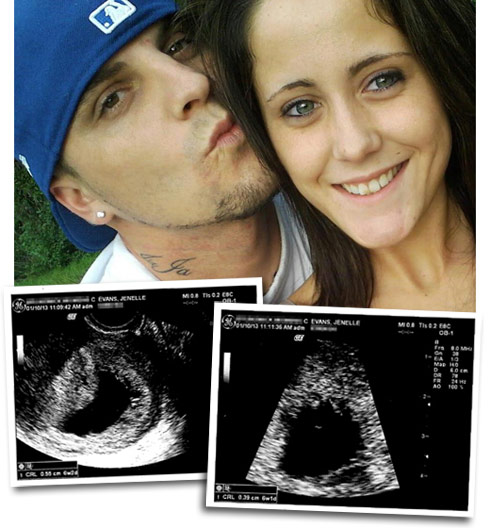 Jenelle’s ultrasound photographs were taken on January 10, 2013. Jenelle’s due date is September 4, but she’s not far enough along yet to know the sex of the baby. “Jenelle says she feels really different this time being pregnant so she thinks she’s having a girl,” Courtland reveals. So what about a name? “We like the name Audriana, we’ve been saying that for a long time,” he adds.

What’s your opinion on the announcement Jenelle is expecting again? Let us know by taking our poll!

Later in the day Jenelle posted a couple photos of her growing baby bump (included at the top of this post) on instagram along with the words, “Baby bumpppp. My little angel!” In contrast, here is a photo Jenelle shared on December 6 in order to debunk rumors that she was pregnant at the time: 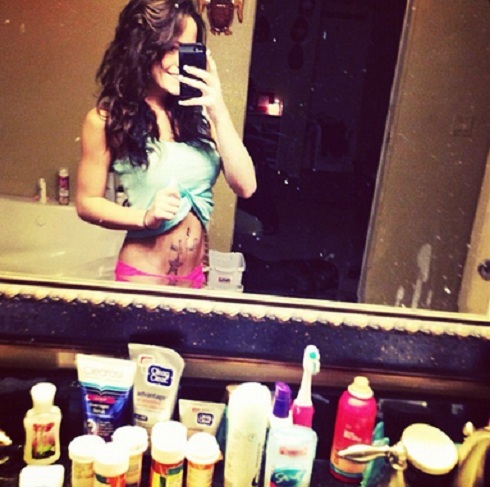 (The medications in the foreground caught people’s attention and Jenelle would eventually go on Stiackam and reveal a complete list of prescription drugs she was taking at the time.)

The 21-year-old mom to be is apparently having a rough go of it. “Jenelle has morning sickness, back pain and muscle pain all the time,” Courtland tells Radar Online. And the issues don’t seem to be going away because Jenelle’s first tweet this morning was, “Awake, morning sickness.” That was followed by, “Just sneezed like 8 times in a row and then coughed 3 times then everything came up and out. :/ ughhhh…”

And here are some more of Jenelle’s tweetegery from today:

“@MsGlennJ_: @PBandJenelley_1 @courtyb11 baby shower? Where do we send the babys presents?” Ill let everyone kno thanks!

Weird…… I can still breast feed with implants….. Lol THAT will be interesting. @courtyb11

My mother and I had the best conversation yesterday about getting Jace back in the future. Everything is looking up for me!

Family dinner at Babs tonight with the babies and my Yankee family, lol. Hate on it, go ahead cuz ill be laughing eating lasagne !

It’s beginning to look more and more like the “fake pregnancy” conspiracy theories are wrong and we can expect a little Jenelle or Courtland Jr. in September! WOW! Leah AND Jenelle are pregnant y’all! Teen Mom 2 Season 4 (or 5, or whenever it actually winds up airing on MTV) is going to be amazing!