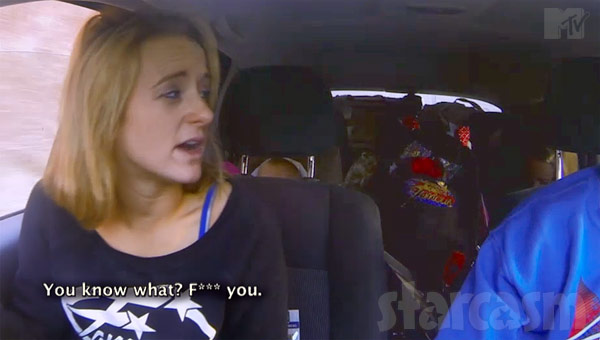 Last week we shared the clips in alphabetical order by first name, so this week I figured I would flip it. Here are each of the clips, with MTV’s description and some brief commentary:

“The car ride from hell.” The tension continues to escalate between Leah and Jeremy in the next episode of Teen Mom 2 — THURSDAY at 10/9c.

Nobody does a dramatic cargument like the Teen Mom franchise, and Leah Calvert adds to her growing vehicular altercation resume with an epic showdown with soon-to-be-ex-husband Jeremy Calvert over her car hoarding tendencies.

“Is Kailyn being sneaky?” Kailyn and Javi continue to struggle with trust issues in the next episode of Teen Mom 2 — THURSDAY at 10/9c.

Despite last week’s apologies and heart-to-heart sit down, Kail and Javi’s trust issues continue as Javi accuses Kail of being sneaky about who she talks to and what she says to them. Kail counters be revealing she feels smothered because Javi continues to invade her privacy. Things seem to deteriorate and Kail ends the clip by saying, “If we’re happier divorced, then that’s what we need to do for our kids.”

“Stop acting like a b!tch.” Nathan and Jenelle ERUPT in the next episode of Teen Mom 2 — THURSDAY at 10/9c.

Jenelle’s preview clip is similar to Kail and Leah’s as she and Nathan continue to fight, including a brief cargument of their own. The cargument soon moves indoors as the volume rises. And just in case you were curious, or playing a Teen Mom 2 drinking game, Jenelle and Nathan say “dude” six times in the clip.

“You can never break a promise.” Adam puts Aubree through some awkward questioning in the next episode of Teen Mom 2 — THURSDAY at 10/9c.

Chelsea’s preview clip starts off with a cheerful dose of Aubree giggling before turning to Adam Lind asking Aubree some jaded questions about what she would prefer the custody situation to be between him and Chelsea. Adam then asks Aubree what Chelsea says about him, but Aubree says she doesn’t remember.

Later Aubree reveals to Chelsea that Adam promised he would take her to his house and then she added emphatically, “You can never, ever break a promise.”

The new episode of Teen Mom 2 airs Thursday at 10/9c on MTV. Here is a synopsis, that reveals a wee bit more about what to expect:

Chelsea and Adam retain lawyers for their custody battle; Jenelle’s chance of gaining custody of Jace is threatened by her explosive arguments with Nathan; Corey wants more time with the girls; and Leah and Jeremy’s marriage hits the skids.

The Teen Mom 2 cast, family, and friends are currently in Los Angeles filming the Reunion (and other things) and I thought I would wrap up this post with some AMAZING videos from the ladies (and gentleman) that we didn’t include in our other Reunion post. Check out this clip of Jenelle Evans taking her turn on a mechanical bull that we previously saw Corey Simms and Jeremy Calvert ride. Jenelle proves she is much more of a bronco buster than either of them thar cowyboys!

Despite Jenelle’s bull-riding prowess, she didn’t emerge from the experience unscathed:

But no matter how amazing bronco busting Jenelle is, it can’t really hang with the Babs Evans teddy bears that MTV apparently had in the dressing rooms:

So this was in Chelsea's dressing room @babsevanstagram