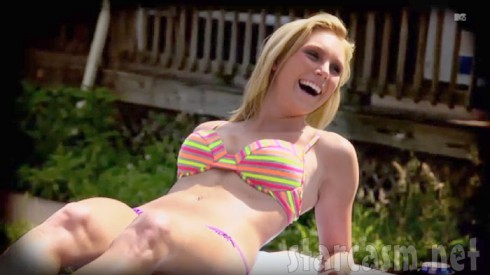 Another week, another MTV reality personality with a sex tape for sale…

On the heels of Teen Mom vet Farrah Abraham’s many layered sex tape / adult film escapade, comes a new naughty chapter as Buckwild’s Shae Bradley has confirmed that she too has a romp that’s being shopped around.

According to TMZ, the video features what they label some run-of-the-mill trailer park action, as Bradley and former boyfriend Jesse J (who also appeared on the show but not as a featured cast member) get right to the point if ya’ know what I mean.

“Yes there is a sex tape and I regret making it with someone who I obviously couldn’t trust and is looking to exploit the relationship we had.”

UPDATE: Shae tweeted that while there IS a sex tape, she’s not involved. “There is a tape apparently. But not me,” she tweeted after saying “@tmz should do their research and stop putting out false stories.” BUT, TMZ has since updated with another story in which they quote Shae as saying, “The materials are being used against me and it should be illegal. I am ashamed of my mistake and deeply regret it.”

Being a veteran of reporting on these here reality star “bedroom specials,” It’s my understanding that most of these transactions go down out in Los Angeles. Bradley has been out on the west coast for a few days recently as she attended the MTV Movie awards with fellow former cast mates. The report does state that they’re unsure if Bradley and that J dude are the ones trying to sell the video.

When the tragic news of the death of Shain Gandee first circulated, and a few times after, Bradley didn’t hold back on her negative opinions of TMZ, so I’m a little surprised she gave them a statement.

I refuse to listen to the 911 call. And @tmz you disgust me for releasing it. Your alls job is to be horribleee people. You know that right?

Bradley also has another connection to a Teen Mom star as she got into a little Twitter shouting match with Jenelle Evans. Shae tweeted out the following once she discovered that MTV had decided to cancel Buckwild in wake of Gandee’s passing, taking a veiled shot at 16 & Pregnant and the Teen Mom shows, which backed the fiery sentiment from Buckwild’s producer J.P. Williams:

When Evans responded in her typical no filter way, Bradley let her have it with Starcasm’s own Jenelle Evans mug shot compilation. Jenelle laughed it off pointing out that she gets tweeted that kind of stuff all the time.

The sources for TMZ added that Shae’s sex tape was made before the show began filming and that the show’s producers were aware of its existence. They went on to state that Bradley and the J dude were warned to keep it under wraps.