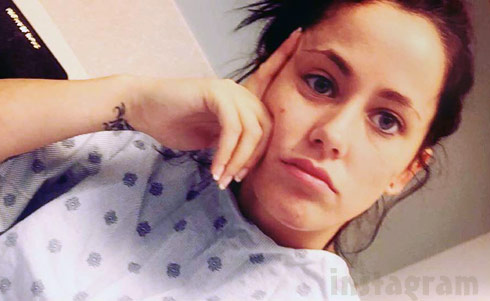 Teen Mom 2 star Jenelle Evans’ mysterious medical issues continue as she is reportedly back in the hospital today.

According to a source for Radar Online, Jenelle drove herself to the hospital in North Carolina this morning after experiencing similar issues that have led to numerous hospital and doctor visits over the last few weeks, including visits with doctors at NYU in New York City.

“She can’t walk from her muscles in her legs and hips being so weak,” says the source. “She’s dizzy and very pale. She’s also having hot flashes and cramps.”

In her first couple of visits, doctors reportedly attributed Jenelle’s issues to stress and/or anxiety, but it sounds as though the root cause may be something else. “They think it’s her pituitary gland in her brain causing all of this,” the source reveals. “That might mean a tumor, but Jenelle’s not sure.”

Jenelle’s multiple social media accounts have remained relatively quiet about her medical issues, although she did share this concerning tweet yesterday:

Wow today is not a good day.

And when a fan inquired on Wednesday about when her next blog post will be put up, Jenelle revealed that she was experiencing pain:

Yes I've been trying but literally in lots of pain so I'm going to try tomorrow. Have a topic tho!!! https://t.co/w9pkbXOIM1

She also mentioned her medical issues after waking up from a nap late in the evening:

Yeah I have medical issues of my own I'm dealing with thank you very much. https://t.co/0ycXzKSZHB

Whatever is ailing Jenelle, we certainly wish her an accurate diagnosis and a speedy recovery!