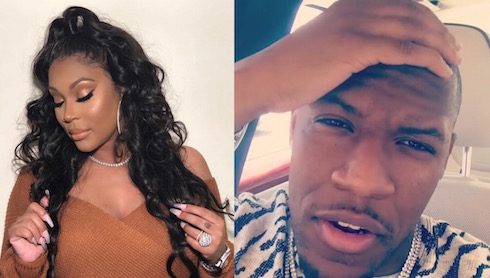 Love & Hip Hop Hollywood star Lyrica Anderson has got heads spinning this season with all her alleged affairs. And, though she’s revealed her pregnancy — and dropped the news that A1 is her baby daddy — the show is still trying to push the possibility that she stepped out on A1 while the two were on a break last year. We all know about Safaree…but did Lyrica sleep with Roccstar instead? (Or in addition to Safaree?)

So Lyrica, whether for fun or for her storyline on the show, got busy. She made it look like she and Safaree Samuels were sleeping together by seeming to allude to him as her first-ever “side n!gga.”

Then, a few months later, Lyrica went and got pregnant. (We know it was a few months later because Lyrica is allegedly just three or four months pregnant as of this writing.) And, when she revealed her pregnancy in a VH1 interview, Lyrica further proclaimed for all to hear that A1, her husband and former true love, was the baby daddy. And that she and A1 were back together, stronger than ever.

But did Lyrica sleep with Roccstar somewhere along the way?

While we can’t say definitively that Lyrica and Roccstar never smashed, it does seem pretty unlikely. For one thing, almost every single Love & Hip Hop storyline gets leaked, either in full or in part, well before each new season begins airing. It was well-known that Roccstar would be joining the cast for LHHH Season 5, but no tea about Roccstar and Lyrica ever got spilled.

In addition, we should point out that Roccstar, though not a fan favorite this season, is a savvy performer. He understands better than most new cast members that a Love & Hip Hop show is at its core a platform for talent — a game, if you will — in all its many forms. And Roccstar does seem to understand the rules of the game. One of which, as he recently explained to HipHopDX, is that you have to give the viewers something to remember you by, once you’ve gotten their interest:

The thing about it is that show is whatever the show is. It’s literally just eyeballs. When it comes to the platform, it always comes back to people wanting to hear something….With that, it all comes down to press play. Most of the time with haters they may not like me, but they like my music. For the album, I’m pushing nonstop. I’m swaggin’ it out for a minute and now that I’m taking on the artist role from the producer role, a lot of the vibes that I lent to other artists means that I get to keep it for myself.

So it’s entirely possible that Roccstar is simply working in cahoots with Lyrica to drum up interest for the both of them via a phony cheating storyline. Doesn’t sound so farfetched, does it?

Lyrica has already confessed to cheating on A1

It’s also worth noting that Lyrica and A1’s newest track, “Ghost,” raised eyebrows upon its release a couple of weeks ago, thanks to what looks like a cut-and-dry confession of infidelity. “I didn’t mean to cheat,” Lyrica sings, in a verse about how she and A1 have to “put the time in” and not “give up” on each other in order to be a better couple.

We’re not going to make it if we don’t put the time in
So this time I’m saying, don’t you just up and leave
Don’t you give up on me. I didn’t mean to cheat
Every good thing takes some time to be, so don’t give up on me
I can tell you now, I’m not perfect.

And here’s the track itself:

Of course, it’s also possible that Lyrica and A1 are straight-up lying on the track, and instead are using it to further their storylines on the show. Whether they’re for real or not, they’re both playing the game well this year.

(Photo credits: Did Lyrica sleep with Roccstar via Instagram)