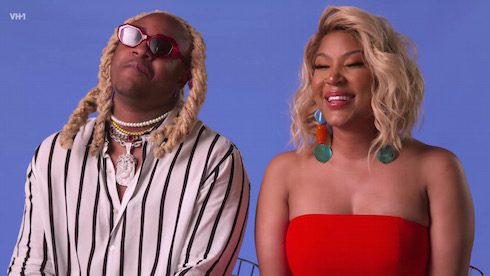 We’ve known about LHHH star Lyrica Anderson’s rumored pregnancy since before the start of Season 5. Lyrica actually teased her pregnancy in a pre-season interview; since then, we’ve also seen footage of her holding her baby bump at a gender reveal party.

But Lyrica has actually gone ahead and confirmed what looked like it was supposed to be a season-long storyline via a brand-new web exclusive with VH1. That’s right: Lyrica herself confirmed that she’s pregnant, in a quick and admittedly adorable clip alongside A1. (And yes, in case you were wondering, Lyrica and A1 both basically confirm that he’s the baby daddy — not Safaree, and not Roccstar.)

Lyrica and A1 are thrilled to become parents

“It’s true: we have a baby on the way,” A1 says in the clip. It’s also worth noting that, in speaking first, A1 is technically the one to break the news to the world.

A1 adds, “This is something I’ve always wanted, so I’m preparing myself.”

As for Lyrica, she says the pregnancy itself has gone pretty well so far; it’s the part that comes *after* being pregnant that makes her nervous:

I’m excited, but, honestly, what makes me nervous is I never imagined being a mom. I’m now responsible for a whole human being, a whole person, making sure they’re OK, they’re nurtured, they’re happy. But I’m thankful for a hubby like A1, I think he’s gonna be an amazing dad. And very, like, helpful.

When is Lyrica Anderson due?

Honestly, it’s pretty surprising — but also refreshing — to see Love & Hip Hop Hollywood‘s producers kill the speculation about this storyline before it went any farther. It was widely believed that the rest of Lyrica and A1’s screentime for LHHH Season 5 would involve a) gossip about whether Lyrica was actually pregnant and then b) gossip about who her baby daddy really was. But here we are, not even halfway through the season, and both of those speculative stories have been put to bed.

Also, judging by Lyrica’s demeanor in the clip above, it sounds like she and the show’s producers have maybe called a truce for the time being. Last week, Lyrica was throwing fire at Love & Hip Hop‘s production, calling out what she said were “fake ass edits” and declaring that she was “done” with the show.

For now at least, it looks like things are back to Lyrica and A1 vs. the world:

You don’t love someone because they’re perfect , you love them in spite of the fact that they’re not..

(Photo credits: When is Lyrica Anderson due via VH1)

Student raises thousands for homeless man who offered his last $5