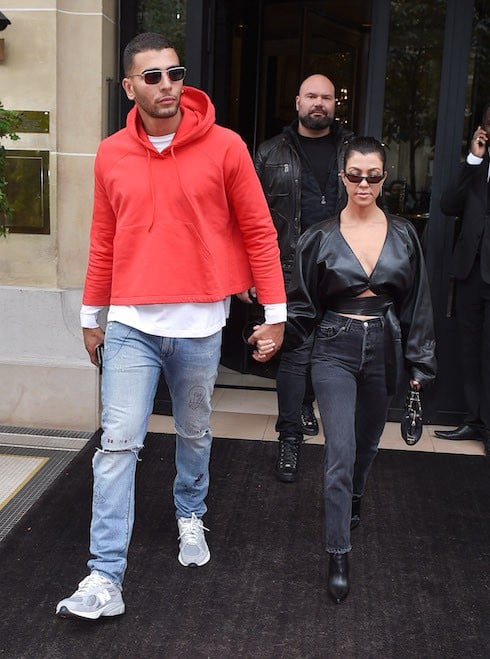 For the second time in two weeks, a major tabloid is reporting that Kourtney Kardashian has become the fourth woman in the greater Kardashian family to get pregnant. Devotées will recall the early October exclusive in Star, which claimed that a sequence of peculiar scenes in the Season 14 premiere of Keeping Up With The Kardashians was really a sly wink at the fact that Kourtney is pregnant by her 24-year-old boyfriend Younes Bendjima, and has been for approximately a trimester.

Now, Life & Style is getting in the game, going on record with an anonymous insider who says that Kourtney simply *had* to get pregnant by Younes because Kim, Khloe, and Kylie’s simultaneous pregnancies had her “[feeling] left out.”

“[Kourtney] loves children and wasn’t willing to give up her dreams of having another because Scott walked away,” said their insider, who went on to explain that Kourtney and Younes are “keeping their pregnancy under wraps,” that Kourtney “was ready for her fourth,” and that the 38-year-old “loves being part of a large family and having so many siblings, and she wants the same for Penelope, Reign and Mason.”

you’re the son in my morning babe

But: is Kourtney Kardashian pregnant too? Like, really, truly pregnant? Delightful tabloid foil Gossip Cop doesn’t think so: the site has handed down its judgment in the form of a typically nasty decree. Their take claims that, since Kim, Kylie, and Khloe are all with child, “tabloids are now making up false stories about [Kourtney] also having a baby.” GC also alleges that the two sources to publish exclusives on Kourtney’s pregnancy–Life & Style and In Touch–created “fictional” insiders and then “invented” the quotes that appear to support the stories.

As we’ve already seen with Kylie Jenner’s pregnancy, the Kardashians’ art is in the tease of a big reveal, rather than the reveal itself. And, as we pointed out when news of Kylie’s pregnancy went wide, the outlets responsible for breaking and then popularizing the story–TMZ, People, and Kardashian home network E!–are all among the most credible in the world of gossip.

So, sure. It’s entirely possible that Kourtney will get pregnant at some point very soon, and as part of Kris Jenner’s grand plan to reverse KUWTK’s long slide in the ratings. For now, though, it’s impossible to say for sure–but speculating is still a good way to pass the time.