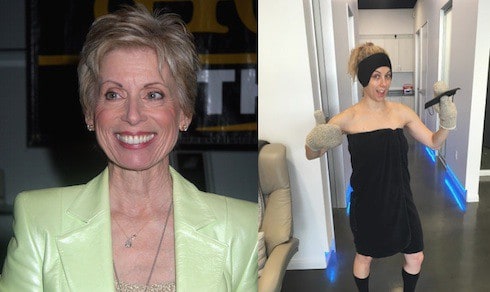 Is Iliza Shlesinger related to Dr. Laura? The continually rising star of stand-up has a brand-new Netflix special coming out, a pair of specials under her belt, a successful mini-series in the form of Forever 31, and, thanks to its cancelation, the distinction of being the only female winner of Last Comic Standing in the show’s nine-year history. Nonetheless, one question continues to dog her above all–and it’s related to the fact that her last name is pronounced almost identically to that of an infamous former talk radio host.

Though their names are pronounced similarly (click here to hear Iliza say “Shlesinger,” and here to hear Dr. Laura’s “Schlessinger” pronounced), the two women are not related. Nor were they in close proximity during Iliza’s formative years: Though Dr. Laura hails from Brooklyn, and Iliza was born in New York City, the Shlesinger of the pair moved to Texas when she was six months old (her parents went also), grew up in the south, and attended schools in Kansas and Massachusetts before settling in Los Angeles and becoming one of the best-known young comics in the city. Both women also have a Jewish background: Dr. Laura’s father and both of Iliza’s parents are Jewish.

That is about where the similiarities stop, though. Compare a few clips of Iliza’s stand-up to some of Dr. Laura’s teachings:

Of course, Iliza is hardly the sole Shlesinger whose relation to Dr. Laura has been more or less presumed. Business analyst Jill Schlesinger once penned a column titled “Dr. Laura Quits and NO, We’re Not Related!” in which she both explained the difference in her surname’s pronounciation versus Dr. Laura’s, but also described that one time when she was called “Laura” on live TV.

PHOTOS What condition do The Last Alaskans Lewis daughters have?