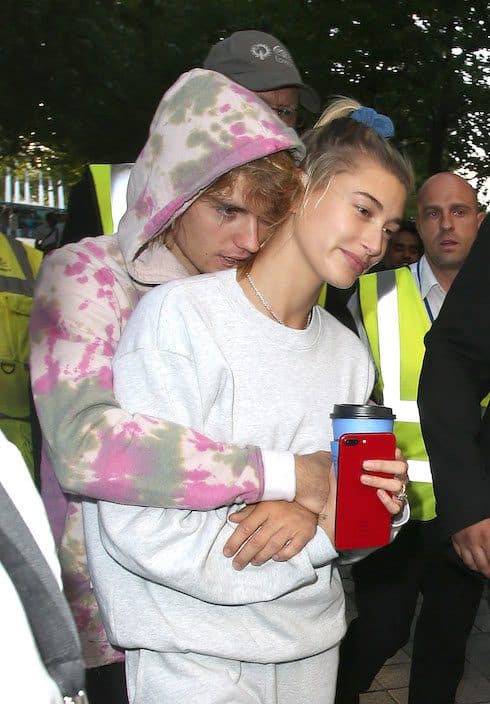 It’s now all-but-confirmed that Justin Bieber and Hailey Baldwin were married in a top-secret New York City ceremony last month. And it seems the pair may have wasted no time consummating their marriage, since now gossip about Hailey Baldwin pregnant has started to swirl something fierce. Reps for the couple are expected to deny the talk soon, but here’s what’s out there as of now.

The heart of the gossip dates back to this summer. Immediately after Justin and Hailey got back together, we saw a whole host of reports claiming that Bieber was absolutely “desperate” to make babies with his beloved Baldwin.

“He’s desperate to start a family,” an insider said in June. “All [Justin] talks about is getting married and having kids. [And] Hailey is only 21 years old but she says she would love to have Justin’s baby — she’s been in love with him for years.”

Not long after that news surfaced, Hailey was spotted in NYC rocking her half-million dollar engagement ring. And she and Justin kept rumors of their imminent marriage and / or her emerging baby bump going for weeks, simply by stepping out together and looking as rumpled and vacant-eyed as two people who’ve spent all weekend having sex usually do.

And now Justin’s father Jeremy is getting the ole Hailey Baldwin pregnant chatter going once more, with an Instagram post that borders on senselessness. It actually sounds like he’s saying Justin, not Hailey, is the one who’s expecting:

To be Father #Bieber’s

Regardless of whether Hailey is with child or Jeremy just wanted some attention, no one affiliated with Hailey and Justin’s camp has addressed the rumors. They haven’t even officially confirmed that the two got married. And, for what it’s worth, the latest word from Gossip Cop is a hard no. According to their take, “a source within Bieber’s camp” says Hailey “is not pregnant.” But that report is almost two weeks old; in light of recent developments, it could be outdated.