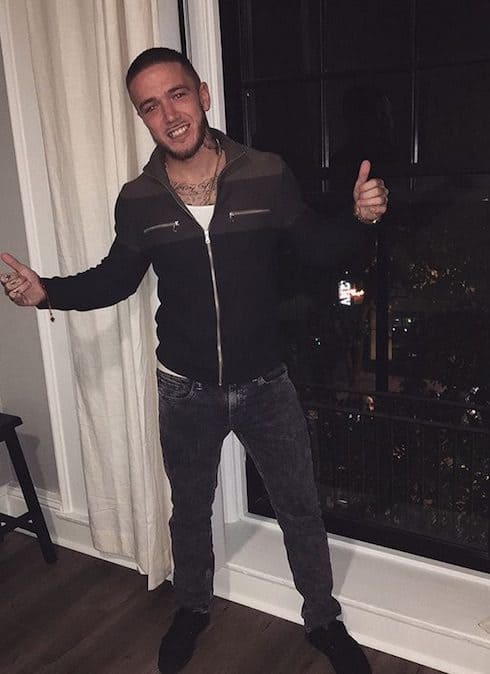 9Mag has a new guest artist, and he makes quite an impression on his first day in the shop. But who is Shine from Black Ink Chicago? More importantly, did he get with Lily after the two of them made it clear it’s what they both wanted? We’re not sure exactly how long Shine will be on the show, but his inspirational story will stick with you — as will his incredible tattoos.

Shine struts into the shop on his first day in town. Being alongside Ryan helps, but, as the crew quickly notes, the man is “Gucci down to the socks.” And, though he’s got the look, Shine’s attitude is far more laid back — he lets his portfolio speak for itself, as Lily notes:

In fact, the only time Shine gets flustered is when Van asks him, straight up, “Black women or white women?” Shine hems and haws for a moment before saying he actually prefers “Spanish women,” and throws a look Lily’s way.

Before we get to that, though, let’s back up a minute. Shine from Black Ink Chicago is guesting from Sacramento, where he owns and operates his shop, iShine Ink. Much like Black Ink Crew star Young Bae, Shine puts his back story on full display right there on the shop’s web site. And, again like Bae, his story is one of overcoming extreme adversity.

According to the man himself, his real name is in fact Shine; his full name is Shine Joseph Oxarart-Davis. The 24-year-old has been tattooing full time since he was eighteen, and got into the game as soon as he could to try and pull himself up. “As a child I grew up homeless with my mom, I never experienced much positivity at all, and I missed out on a lot of things that most kids get to see or do,” Shine says.

Just as Ryan explains in the clip above that he wants to bring in high-profile guests to help make 9Mag a leader, Shine explains his whole approach to tattooing is essentially the same:

Since i was already nothing, i didnt want to get into tattooing and be nothing. I knew that there was levels to the industry and i never saw myself being at the bottom of it. Even from the start i set a high standard for myself, i didnt wanna compare myself to the best artists in my city, i wanted to be up there with the best in the world.

The man’s art is definitely among the most striking you’ll see. We only caught a few glimpses of his work in Shine’s first scene; here are a few more, courtesy of his Instagram page. Ryan wasn’t just talking about that black-and-gray shading:

Im hiring another artist for the new shop. Going to set up interviews soon, some have already contacted me, but if your a tattoo artist and you think that your tattoo style / personality would fit in , then send me a DM and we’ll get an interview set up. If your not an artist tag your favorite artist that might be looking for a new home. We set a high standard, the artists are spoiled and make alot of money. So tap in ? • Subscribe to my channel Youtube.com/c/iShineink • Visit my Website : https://www.ishineink.com • Done with @axysrotary Shoutout @virfxmedia Sponsored by @tatdaddyclothing • • #ishineink #ishinetv #youngvisionaries #inkfluencer #inkedmag #sullentv #tattdaddyclothing #sacramentotattooartist #sacramentoproud #tattooartist #tattoo #sleevetattoo #blackandgrey #gucci #versace #balenciaga #louisvuitton #hypebeast #complex

As for whether Shine from Black Ink Chicago eventually did get together with Lily, it looks like we’ll have to wait and see. The two of them have been notably silent about Shane’s guest spot on social media, so maybe it was a quick thing, and maybe nothing happened at all.

After all that, don’t forget to tune in: Black Ink Crew: Chicago airs Wednesday nights at 9 on VH1.