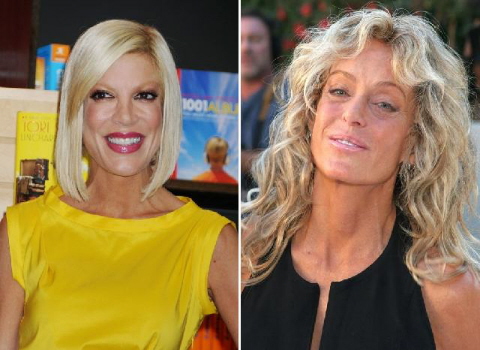 Tori Spelling is out there and I mean really out there.  In the latest Tori revelation she claims to have received contact from someone far outside the 90210 area code.  In fact, her communication came from beyond the grave in the form of the late star Farrah Fawcett!

In an interview with Out Magazine Tori spoke in-depth about the para-un-normal Fawcett communique.  Spelling said:

“It was pretty surreal.  We were neighbors for years. She basically wanted me to give a message to [Fawcett’s son] Redmond and to her family and she was doing these very specific call-outs for things that they would understand.”

Now this beyond the grave shout out didn’t just fall from the sky.  None other than mega creepy TV psychic John Edward, not to be confused with mega creepy politician John Edwards, mediated the whole spiritual long distance chat.

“He offered to do a reading with me and I was hoping I would talk to my dad. I’d lost a best friend a long time ago and I was hoping he would come through. And then, all of a sudden, [he said] Farrah Fawcett’s coming through.”

Oh man, I was hoping that Farrah might clue us in on why Megan Fox is into Tori’s old Beverly Hills High romance Brian Austin Green, but instead the afterlife self centered version of Fawcett focused only on her son and not on those of us suffering from where are they now 90210 trivia needs.  At least we know this celestial call was the real deal, or that Tori thinks it was anyway.

“If it had been some psychic that I’d walked in off the street for five bucks it would have been different. But it came through John Edward,” she says. “He’s a medium, so he channels people. I’ve been to regular psychics that turn over cards, tarot cards, and sort of read your future, that type of thing. But, with him, literally people just come to him and say things that they want the person to hear.”

It is important to note that this sensational bit of information was provided during Tori’s promotion of her new book Uncharted TERRItory.

Kim Kardashian pregnancy update: Her baby boy is in breech