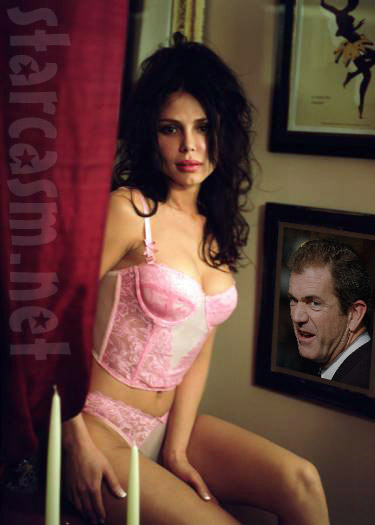 It appears that what happened is Oksana’s restraining order, filed last Monday, went unnoticed by the media, but Mel and his attorneys filed another restraining order soon after that prevents Oksana from releasing certain information, and that’s what set off the alarm. Mel also had the initial restraining order modified to allow him to see the couple’s seven-month-old daughter Lucia Anne.

A friend of the Gibson family named Robyn contacted Raisa Murashkina of KP.RU and stated:

She had no choice but to go to court after a terrible accident in their family – Mel started hitting Oksana. It happened several times. She would never tell journalists about it herself. She would make it look as if nothing happened. But she desperately needed this court order for personal safety.

Mel was losing it regularly lately. Oksana was scared. She is now waiting for the hearing regarding child custody. Oksana does not want to deprive her daughter of her father. But she wants court to settle the schedule of days and hours when Mel can be with Lucia.

It is forbidden to talk about details of the case until the end of the hearing. But I cannot take reading all those lies!

Sadly, this marks the end of Mel Gibson directed Oksana Grigorieva music videos like the surreal “Beautiful Heartache” and this gem, called “Evening With Daddy.” (Pay close attention and you will see Oksana’s infamous hammer and sickle Soviet Union tattoo Mel allegedly made her get!)

Something tells me this story is going to get a lot uglier once Oksana is allowed to talk openly to the press. Stay tuned!

Mel Gibson and Oksana Grigorieva attend ‘Edge of the Darkness’ premiere at the Palafox cinema on February 1, 2010 in Madrid, Spain. (Photo by Carlos Alvarez/Getty Images)