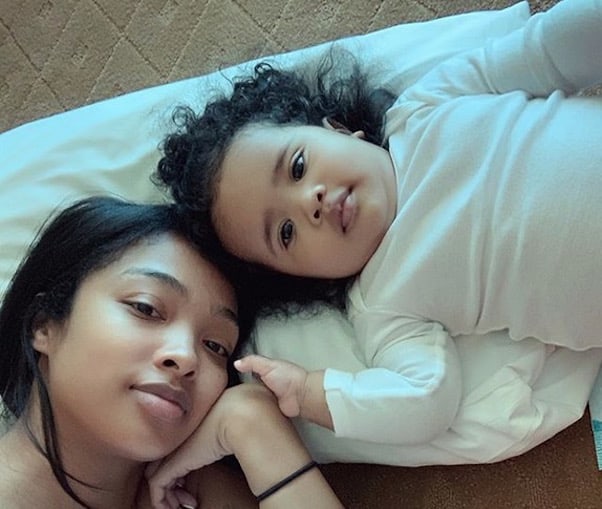 Princess Love shocked Love & Hip Hop Hollywood fans by claiming out of nowhere that she’s done with the show. Though filming for Season 6 has been underway for months, this naturally begs the question: is Princess for real? Or is there just a (much) simpler explanation behind Princess’ bold declaration?

It’s no secret that Princess Love’s #1 priority for the past year has been her and husband Ray J’s first child together. Their daughter, Melody Love Norwood, was born May 23rd of last year and has straight-up dominated Princess’ social media feeds since then. So Princess wanting to spend less time in front of the cameras and more time with her daughter might make sense (though it would hardly make her unique among VH1 reality stars).

With that said, here’s Princess Love’s official statement on the matter, which she made via Instagram. (We’ve screencapped the post instead of embedding it in case it gets deleted in the near future, which seems likely.) 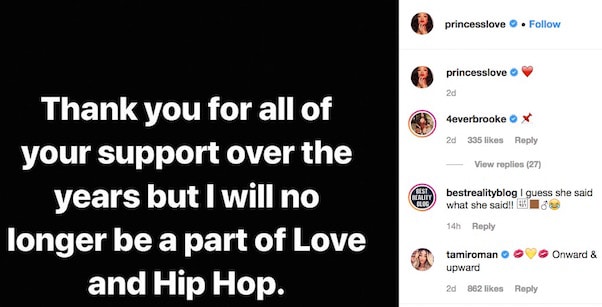 Again, this came pretty much out of nowhere. So far, all the major LHHH Season 6 drama involves newbie Summer Bunni, who’s already brawled with Lyrica Anderson, dragged Lyrica and A1 all over social media, and is apparently “causing havoc” on set.

But it’s highly unlikely that Summer has Princess so shook she’s refusing to film. And though Princess Love has been on the baby storyline for the last two years, it also seems unlikely that she simply wants to quit the spotlight for good — or even for the time being.

A better possibility is that Princess and possibly Ray J are trying to engineer better contracts for themselves, and Princess is using social media to try and pressure Love & Hip Hop Hollywood‘s new production company. Either that, or she’s protesting whatever her storyline has turned out to be this season (given that we haven’t yet gotten any tea on Princess and Ray J, their story may be slacking).

As always, @BestRealityBlog‘s take is probably the correct one:

In addition, it’s not like the cast members can just stop filming whenever they feel like it. Love & Hip Hop contracts are apparently quite strict. And Princess would not be the first cast member to try and get out of one only to be ordered back to work. K. Michelle has been trying to get out of her contract for awhile now; Moniece Slaughter thought she was free after last season, only to find out otherwise. To date, the only cast member we know of who’s gotten away clean is Masika Kalysha, and she had to bring some lawyers to bear to do it.

In any case, Princess Love has been filming for Love & Hip Hop Hollywood Season 6 for awhile now, and will feature in the new episodes. The season premiere is believed to be coming this July.

LHH Hollywood: Are Soulja Boy and Nia Riley together? He insults her vagina for all the world to see