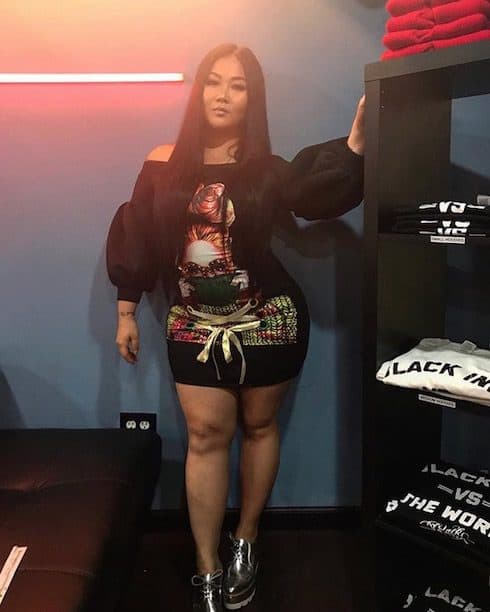 Young Bae from Black Ink Crew had a pretty eventful summer. The tattoo artist and reality star got the surprise of her life when she went in for a routine pregnancy checkup with five weeks to go before her late June due date — only to be told that her baby was in breach and doctors needed to induce labor right away.

Unfortunately, the game of social media telephone that ensued led plenty of the show’s viewers to believe the unthinkable had happened. Did Young Bae lose her baby? Now that Black Ink Crew Season 7 is here, Bae is sharing the details of her unexpected delivery — and describing the joys (and fears) of motherhood — for the first time.

Speaking to VH1, Bae explained that her baby boy Nikko was born on May 19th, though Bae hadn’t been expecting to leave the doctor’s office with anything other than a clean bill of health. “I went in for a checkup…came back with a baby. My baby just couldn’t wait,” Bae said, laughing.

Bae also explained what the scene was like when she was told she’d be having Nikko a lot earlier than she’d planned:

He came five weeks early, he just broke his water, and just, ready to come out. And he was breached. So, y’know — I had an emergency c-section! They said, “You’re gonna have this baby now!”…I had to stay there for like three days, I was freaking out, crying; I didn’t know what to do.

As dramatic as the delivery was, Bae went on to say she’s been learning all about an old adage. The pregnancy is actaully the easy part; it’s getting your child home and taking care of him that’s truly stressful:

And then when I brought him home, it was even *more* chaotic, I was crying even more. Like, I was calling my doctor: “Listen! He’s crying. Something’s wrong.” And she was like, “What?…So? Babies cry!” And I was like, “My baby’s crying!”…When my baby’s crying, I’m freaking out; when my baby’s quiet, I’m like, ‘Are you alive?’ Freaking out again!

Nikko’s early birth created one more unexpected complication. As Bae revealed, her mom was scheduled to come over from South Korea and help out after Bae gave birth. But the plane ticket Bae bought her mom was for June 14th — meaning Bae had to do her first four weeks of motherhood without her own mother there to guide her.

So, did Young Bae lose her baby? Far from it — she’s already on record saying she might be ready for baby #2. Plus, here’s her latest snapshot of Nikko, looking super chill for someone who was so eager to get here in the first place:

Additionally, here’s Bae’s boo Rob’s touching tribute to the mother of his child, shared two days after Nikko’s birth. Rob says says it’s his “honor” that Bae, “the smartest and most hardworking person he’s ever met,” is his fiancée and the mother of his child. If you don’t have a box of tissues nearby, go get one before you start reading:

Dear Young Bae, Being born as a Citizen of the United States I've taken for granted all of the opportunities that come along with citizenship. In the time we've shared together I've seen how hard you work at building your brand and business all while dealing with the pressures of reality stardom and all within 11 years of being in this country. Through all of that you still found time and energy to invest in us and our family. I respect and salute you babe. You are the smartest and most hardworking person I've ever met and it's my honor that you are the mother of our child and my soon to be wife. This child is a gift from God and I promise to be your rock as we raise him to be just as strong as we are. I love you my Queen and will walk with you along this blessed path God has set for our family

(Photo credits: Did Young Bae lose her baby via Instagram)

Is NeNe coming back for RHOA Season 13, or is Bravo forcing her out?