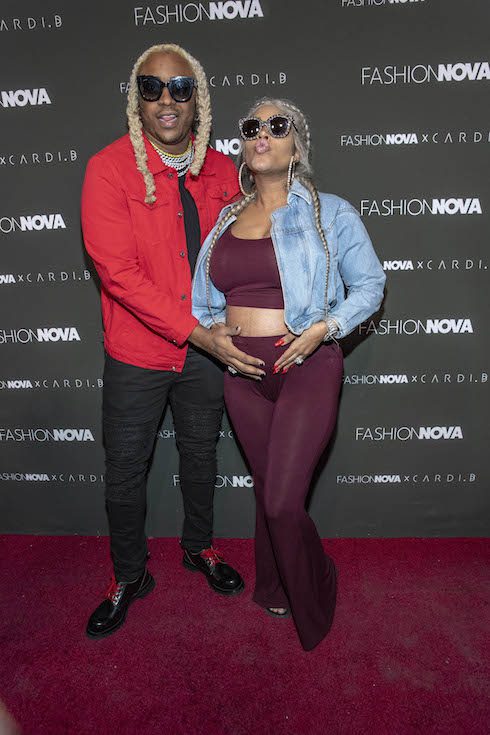 Congrats to Love & Hip Hop Hollywood stars Lyrica Anderson and A1 Bentley! The couple just welcomed their first child, Ocean Zion Bentley, into the world. Ocean’s parents have been understandably protective of their baby, but the first (blurry) Lyrica Anderson baby pics have surfaced — along with some harrowing new details about the difficulty Lyrica had during the delivery.

Ocean’s birth marked the more-or-less official end of LHHH Season 5’s biggest drama. All season long, the show tried to keep the identity of Lyrica’s baby daddy a secret: A1, Safaree, and Roccstar were all floated as possibilities. (Lyrica kind of spilled her own tea, though, by revealing that A1 was her real baby daddy months before the season concluded.)

Then, in early October, Lyrica confirmed she was seven months pregnant. She only missed the LHHH Season 5 reunion special by a couple of weeks: Lyrica gave birth to Ocean Zion on December 1st.

In keeping with the current Love & Hip Hop cast trend, the first of the Lyrica Anderson baby pics didn’t actually reveal Ocean’s face. Lyrica and A1 both shared the same pic of their newborn son with a heart-eyed emoji over his face on Instagram. Here’s A1’s version of the pic:

As for following Ocean on IG? The link in A1’s bio takes you to @oceanzionbentley‘s Instagram page. The newborn already has 100,000 followers — which is extra helpful for his parents, since Ocean’s only update so far is a plug for his momma’s new EP Strength.

The second of the Lyrica Anderson baby pics came as the first-time parents loaded their boy into the car for the ride home from the hospital. You can catch a teensy glimpse of Ocean’s teensy face in this clip that Lyrica shared, shortly before the heart-eyed emoji swoops in and covers it up:

Lyrica opened up about her pregnancy and birthing difficulties in a new interview transcribed by VH1. “It was a tough pregnancy,” Lyrica revealed, in part because of the LHHH Season 5 cheating drama and “a lot of emotional things going on.”

But it was after she’d given birth to Ocean that Lyrica really began to have problems. As she explained, she started to convulse and had such itchy skin that she nearly pierced it with her own fingernails — the hospital staff had to bring in toothbrushes for her to scratch.

“I literally thought I was dying,” Lyrica added:

I ran a super high fever out of nowhere. I started going into some sort of convulsions. I couldn’t stop shaking for 7 hours straight, just shaking, shaking, shaking with a fever. Then, I couldn’t stop itching. They literally had to bring toothbrushes in my room to let me scratch my skin so that I wouldn’t pierce my skin and it was the scariest thing because I was itching and shaking and I literally thought that I was dying. I was so scared, like why was I shaking so much?…They were constantly checking my vitals because I have really bad chest pain and I was like I want to make sure I’m not having a heart attack.

Though Lyrica didn’t explain how doctors were able to bring her body back to normal, she, Ocean, and A1 were able to leave the hospital the day after Lyrica gave birth.

We’re hoping that Lyrica and A1 are not yet finished on Love & Hip Hop Hollywood — something that had been widely rumored earlier this year. Assuming they’re both still on the show, we should get our first televised look at #BabyBentley when LHHH Season 6 drops in the summer of 2019.