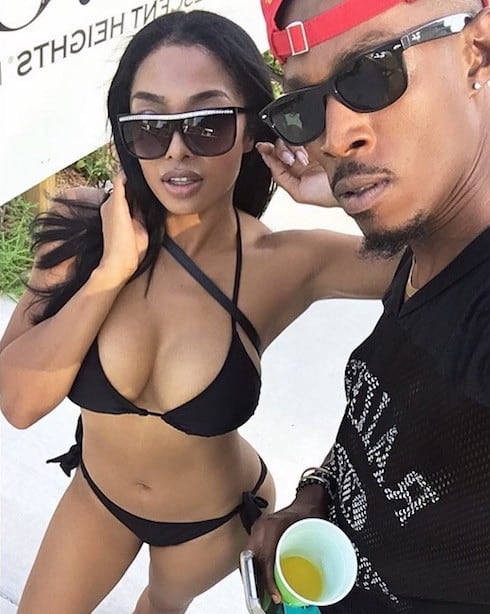 Last season Love & Hip Hop Hollywood was all about the wedding and prenup drama between Ray J and Princess Love, and it looks like this season might take their marriage to its logical conclusion. (No, not divorce.) Recent gossip suggests that *someone* on the LHHH cast is with child, and a pair of recent Instagram updates from Ray J have fans of the show wondering: Is Princess Love pregnant?

Rumors about Princess’ uterus were already spreading well before Ray J shared the following photo a few weeks ago. According to the caption, he’s prepping a house with space for more than just himself and his bride:

Giving the two of them the benefit of the doubt, though, there’s nothing in the caption that suggests Princess Love is definitely, totally pregnant. Ray could just be thinking long-term. As for bedroom ceilings, who among us hasn’t stared at one–possibly after sex, or right before–and thought “This angle would make for a terrific Instagram post”? Let that person cast the first stone.

Then came this tease, just a few days later:

Again, though–maybe Ray J is just really proud of the work he’s putting in on this new house. He could be a sucker for a spiral staircase. And, in fairness to him, those are some pretty baller stairs. Whoever stained that wood did a fantastic job. If you had access to a set of stairs like that, you’d probably have your wife pose on them and then refer to them as your 2nd priority, as well.

Of course, Princess has been much more coy with her social media updates. If it does turn out she’s pregnant, we’ll know she’s been winking at us since Ray J started dropping hints: Princess has plugged Flat Tummy Tea once per week every week since Ray’s first post. It’s almost as if she wants her fans to think “Princess couldn’t possibly be pregnant; look how flat that tea is making her tummy!”

And there’s one more intriguing piece of (possible) evidence to support the notion that Princess Love is pregnant. Though she’s not known for throwing back drinks sailor-style, she hasn’t shared a single photo where she’s holding an alcoholic beverage–or any drink at all–since January 30:

It’s also worth pointing out that the noted tea spillers over at @BestRealityBlog appear to have gotten word of a Love & Hip Hop Hollywood cast pregnancy. They were spot-on with a bunch of spoilers ahead of the LHHATL Season 6 reunion, so their bona fides are pretty well established:

OMG just burnt my damn lip sipping this tea! Somebody on the #LHHH cast is supposedly pregnant!!! ? #lhhhollywood ??