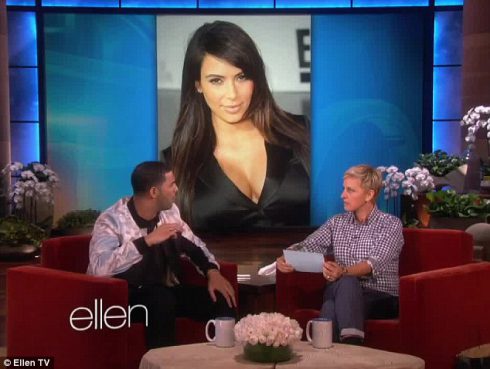 That headline is a question that’s definitely been on Kim’s husband Kanye West’s mind for awhile. Now, Kanye has taken to Instagram video to get some things off his chest about it that “were not sitting right with [his] spirit.”

Kanye says that since he’s “out of the sunken place” — which may be a metaphor for depression or his struggles with opiate addiction — he can be “Ye” and express himself openly.

“Ye” went on to take shots at Nick Cannon, who did formerly date Kim, for helping spread the rumor that Kim and Drake hooked up at one point. Then Ye went in for the kill with Drake, who (perhaps intentionally) sparked up the Kim K speculation this summer with his hit song “In My Feelings,” which features the line “Kiki do you love me?”

KiKi is Kim’s nickname, true. But it’s also the nickname of many, many women, including perhaps Drake’s ex-girlfriend, Canadian singer Keshia Chanté. Still, Kanye argues, Drake’s use of the nickname was a calculated move. Kanye gives the hypothetical epxlaintion that if he had an ex-girlfriend from his home state of Chicago named Rinita, and Drake was married to Rihanna, Kanye would not make a song about “Riri.”

Kanye is also upset that, in the wake of the speculation about whether or not Drake was talking about Kim in the song, Drake hasn’t come out to squash the rumors. But we can point out one time when Drake did talk about it: way back in 2013, when Ellen confronted Drake about whether or not he dated Kim. Drake responded emphatically, saying “Oh no, no. Come on! What’s going on here?”

Recently, though he hasn’t said much. For her part, Kim did shut down the rumors via a recent Instagram comment. “Never happened. End of story,” she replied to a Shade Room headline about Nick Cannon’s thoughts that the situation “wasn’t far fetched.” 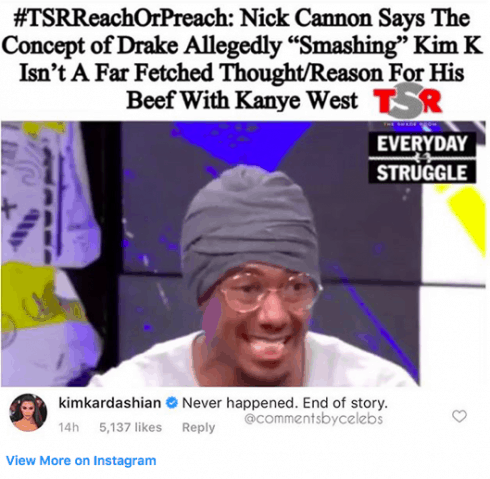 Kanye also addressed Pusha T’s Drake diss track “The Story of Adidon,” which uses a beat Kanye made with samples from the song “Strange Fruit.” Kanye blames not contacting Pusha to ask him not to diss Drake over the beat on being in a “medicated state.” In this instance, it seems like Kanye is allowing excuses for himself, but not for Drake.

The other thing to keep in mind about all this is that Kanye’s new Yeezys (Adidas Yeezy Boost 350 V 2) launch tomorrow, and he’s hoping to outsell the new iPhone XR. It’s a bit of an odd retail war, but Kanye has always admired and compared himself to Steve Jobs, so it looks like he wants to beat the late Jobs’ company in a head-to-hed involving two entirely different products. A little Internet beef with his music and romantic rivals will likely light a little fire under the Ye brand in general.