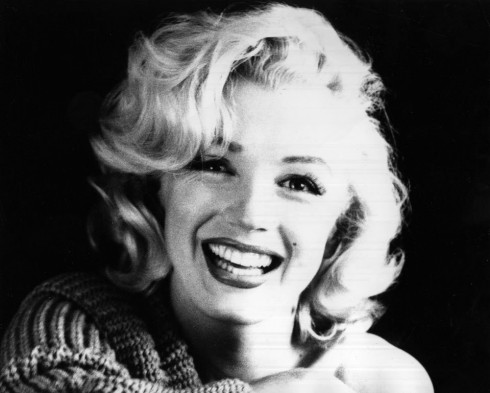 Remember when Kim channeled Audrey Hepburn in a now-notorious photo shoot? Remember the crazy days when she went blonde? Well, now you can take “Kim Kardashian blonde” and “Kim Kardashian channels dead icon” and smash them together, ’cause the most searched-for person on the internet has combined the two looks. In the wake of her first-ever Vogue cover last year, Kim’s taking the Brazilian edition of the magazine by storm, with a look many observers say is straight-up Marilyn. Here’s the evidence:

Marilyn was certainly the magazine’s aspiration. According to Vogue, the setup was simple, and direct: “The idea of the shoot for Vogue Brazil, photographed by the German Ellen von Unwerth in a house in Malibu, was to portray Kim as a sort of Marilyn Monroe version in 2015–and, coincidentally, her hair was dyed platinum at the time.”

There’s also a topless shot Kim did for the magazine, which hits Brazilian newsstands this week. It’s not exactly unsafe for work, but, just to be completely safe, here’s a link to the image. The gloves are a nice touch.

The editorial accompanying the spread is positively laudatory where Kimmy K is concerned: Vogue‘s editors call her “one of the biggest media phenomenon of our times,” and claim that she and her family have “redefined the entertainment industry this decade.”

Additionally, here’s a teaser Kim shared on Instagram, set to the tune of her husband’s track “All Day”: