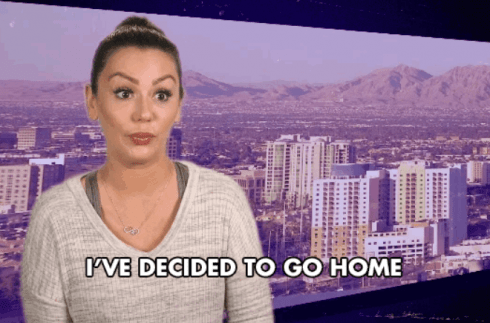 Last week’s episode of Jersey Shore Family Vacation saw Jenni “Jwoww” Farley leave the rest of the cast mates in Las Vegas. It seemed like Jwoww was both upset about Angelina Pivarnick showing up, and the fact that Snooki invited her BFF Joey to join them in Vegas. Snooki, however, says it was only the editing that made it seem that way and Jwoww had a another reason for going home. Will she be back?

“The last episode, nothing made sense to us because we know exactly what happened,” Snooki told Buzzfeed’s AM to DM. “Sometimes editing, they try and leave stuff out, so they make it seem like something was there that wasn’t. We’re not scripted at all. We just go in there and do our thing, but we never know how they’re going to edit it.”

“I got upset for Jenni because she left for her son, because her son had a doctor appointment, but they made it seem like she left because she was mad that I invited Joey and Angelina,” Snooki explained. She said that Jwoww actually asked Snooki to invite Angelina and Joey, but “the editing really screws her up.”

In this editing that Snooki has a problem with, Jwoww is seen in a clip griping about her annoyance at Nicole (Snooki) for inviting Angelina and Joey.

“I’m annoyed at Nicole for inviting Angelina, and now Joey’s coming in,” Jwoww says. “I just want time with my roommates, my family, on vacation. This is a family vacation. This isn’t a third-wheel-friend vacation. And now I’m a little bitter. The vibe’s changed so much this last 48 hours. I have decided to go home.”

The ending left a mystery as to whether or not Jwoww will even be coming back this season, but it does seem like maybe her exit was a planned, short exit to deal with a doctor’s appointment and she was just also annoyed at things going down.

Later in the season the entire cast heads back to Seaside Heights, NJ, where it all began and Jwoww has been spotted multiple times filming there, so it looks like she definitely didn’t leave for good. In the below Instagram video you can see Jwoww filming with everyone.


Amelia Cunningham is a Starcasm writer and editor @AmeliaStarcasm