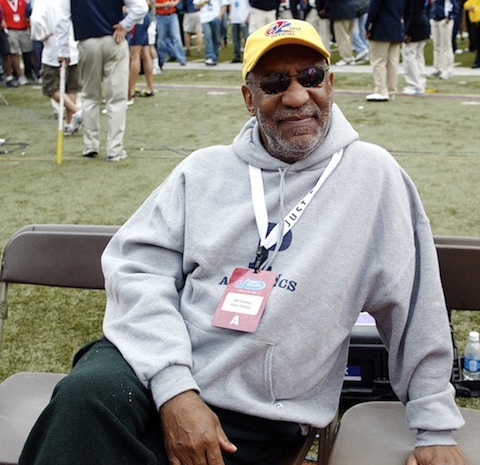 The first of Bill Cosby’s three Canadian performances went smoothly this week: the comedian received a standing ovation from his audience after Wednesday night’s performance in Kitchener, Ontario. Evidently, the Cos took that as an invitation to really loosen up.

Last night, during his show in London (ON), Cosby addressed a woman who got up in the middle of the gig, to ask where she was going. The woman replied that she was going to get a drink, and jokingly offered to get Cosby one, too.

At which point, Cosby declined the offer, smiled, and said–into the microphone–”You have to be careful about drinking around me.”

The audience responded with a low “Ooooo,” and then broke out into applause and laughter.

But the exchange didn’t sit well with everyone. Shortly thereafter, one man shouted “We don’t love you, Bill!” When the audience began to boo, and security took the man from his seat to eject him from the venue, he shouted “You’re a rapist! I’m being ejected because you’re a rapist!”

When the audience of about 1,500 continued to boo the man as he left the hall, Cosby attempted to calm the crowd down, asking them repeatedly to neither boo nor clap. Check the video:

Cosby has only spoken out about the dozens of allegations against him on one or two very sparse occasions–one such response came via Twitter, and consisted of nothing more than two quick thank yous to friends who stuck by him publicly. The Canadian shows coincide with accusations brought by three more women; the total number of women accusing Cosby of some sort of sexual misconduct, from fondling to outright rape, now stands at thirty.
(Photo credits: Receta’s Gourmet; WENN)