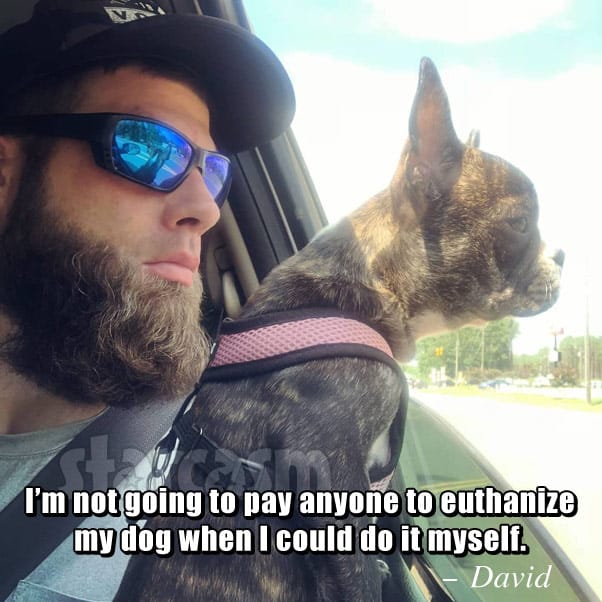 Monday was the highly anticipated New York City launch party for former Teen Mom 2 star Jenelle Eason’s JE Cosmetics line eyebrow kit, a party that looks to have taken place on her hotel room balcony after the salon originally slated to host the event backed out. To help promote her new cosmetics line, Jenelle and her husband David Eason talked at length with People magazine about David shooting and killing their French bulldog Nugget.

I will begin with the JE Cosmetics launch party, which seemed to go off rather well given the issues they were having. The shindig was attended by quite a few clients of Jenelle’s PR manager Johnny Donovan, including fellow fired Teen Mom star Farrah Abraham, Farrah’s daughter Sophia Abraham, 90 Day Fiance: Happily Ever After‘s Ashley Martsen, and JE Cosmetics model Nickole Ciszak.

There were a few social media influencers on hand as well, including teacup pup Nyla Star The Yorkie:

Nyla Star was seen licking a few faces at the party, and thankfully David Eason did not misinterpret that as a threat.

Speaking of David Eason seeing little dogs as threats, let’s move on to his and Jenelle’s interview with People. At the very beginning of the interview (video embedded below), David was asked directly whether or not he killed Nugget — a valid question given the couple’s pseudo denials after the fact.

“Well, it wasn’t really about ‘Did you kill the dog or not?’ It was a situation where my daughter, her health, her safety was in danger,” David explained, referencing the fact that Nugget had reportedly nipped at the couple’s two-year-old daughter Ensley on two separate occasions.

It upsets me just as much an anybody who doesn’t even know Nugget who may think they’re upset. You know, this was something that nobody wants to ever have to do. I mean, the dog was aggressive. Yeah, she might not be huge or whatever, but you know when a dog bites a child on the face more than one time, then it should never be around the child again. If you give the dog up for adoption, one day it’s going to be around children again, regardless if the person has kids or not, or whoever it may be.

If you call the authorities at that point, the law says the dog has to be euthanized. I’m not going to pay anyone to euthanize my dog when I could do it myself. I mean, I loved that dog. I still think about her every day…It’s really hard for me. A lot of people, they put me down for it, they hate me for it, but like I said, it was not something I wanted to do.

Jenelle chimed in and said that the killing of the dog “also wasn’t something that was supposed to meant to be public. It’s a private family issue that happened within our household,” she lamented. “We didn’t want it getting out in the news at all, of course! But, you know, I mentioned it to one friend. She told Kaiser’s father, Nathan. Then Nathan called the cops and said ‘Check on my son.’ TMZ got a hold of that 911 call, and that’s how it got brought up in the news.”

Jenelle then explained that David grew up “in the country lifestyle.” She continued:

He hunts, he fishes, and the way he was raised is really different than a lot of other places. We understand that people are scared of the whole gun thing, and they just don’t understand it from David’s perspective. He’s grown up — his father taught him, ‘Don’t let any animal hurt you, especially if it’s, like, even a bear or coyote or something crazy,’ and he just thought what he was doing was best. 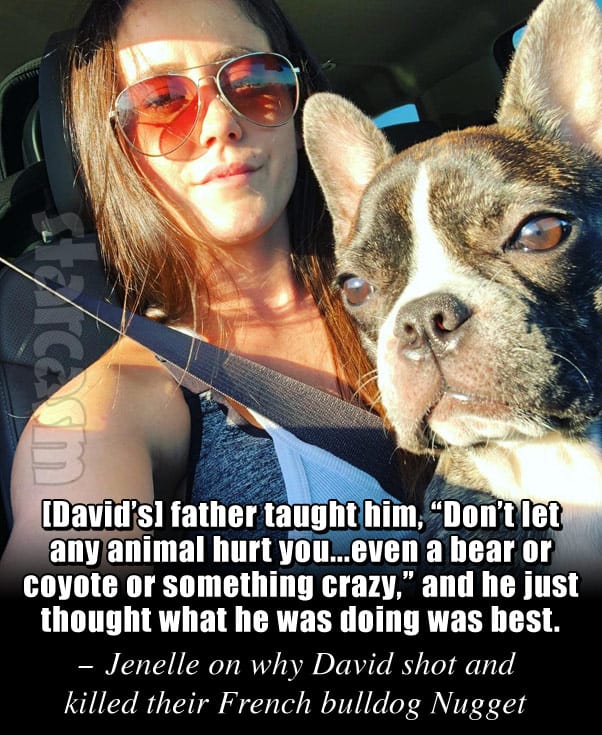 Despite David clearly trying to justify his actions moments before, Jenelle then issued an apology and admitted to wrongdoing on his behalf. “He does realize what he did was wrong,” Jenelle said, “and he does realize that he shouldn’t have done it.”

She revealed that David allegedly apologized to her. “He said, ‘I’m sorry. I didn’t realize how bad it was going to hurt everyone. Not just me, but the kids.’ So, he understands all that.”

David was asked whether or not he would re-home Nugget instead of shooting him if he had it to do over again. “I don’t think the dog should have been re-homed, no.” David said. “Regardless of what I did, the dog would have been euthanized. It wasn’t up to me. It’s the law. The law says if you don’t euthanize a dog that bites somebody, within a reasonable amount of time, you are held liable for neglect whenever an animal is harming a person.”

David argued that he “could have gotten in trouble” if he hadn’t shot Nugget before he iterated his claim that the dog would have been euthanized regardless.

Jenelle was then asked about a report that she also called police about the incident, but she said that she was merely returning a call from the police looking into the matter. They wanted to know if the dog shooting was a publicity stunt, and she gave them David’s number. They called David, and David called them back. David said he explained exactly what happened, and they told him he didn’t break any laws.

So, what was Jenelle most surprised by as far as the public fallout after the story got out? Jenelle’s response:

To me, it was more like, I think instead of conversating [sic] with me before it happened, he just did it, and he didn’t realize how big that was going to be if it did get out. He also isn’t used to social media or being on TV or anything like that. I’ve been around it since 2009. I know my actions from the past have made me learn not to do those mistakes again, and David I think is learning from everything that is happening, and he just needs time to do that.

I have, and we went to co-parenting counseling sessions — it’s kind of like a marriage session in one. And he’s also taken anger management classes; he took six classes, completed the whole course. So I mean, he did do things to try to better himself, and we’ve been working out really well ever since. We got over it. Actually, my pitbull Jax, he actually killed one of our pigs recently. So instead of David saying, ‘Well I’m going to euthanize the dog,” [he said] “Let’s just give the dog away.’ So we gave the dog away instead to one of my friends, Katrina, who had, like, 30 acres of land. So he’s even taken the initiative to correct his actions and not repeat the same mistakes that he’s made before.

Soon after People published their interview with Jenelle and David in which David seems to very clearly admit to killing Nugget, TMZ shared a post revealing that the confession might lead to local police re-opening their investigation:

Law enforcement sources tell TMZ … investigators at the Columbus County Sheriff’s Department are well aware of David’s interview with People, in which he confessed to killing Nugget after she bit their kid. Now, we’re told the department is deciding whether to open a new probe into the killing and potentially charge him with animal cruelty.

It should be noted … cops have NOT officially reopened the case, yet. However, we’re told if they do go forward, it’ll be a new case started from scratch … and this interview will be a big part of it.

There was a particular line in the TMZ article that apparently rubbed Jenelle the wrong way. “For her part, Jenelle claims the whole ordeal was supposed to be a private family matter, but word somehow got out,” the article reads. “Truth is … the word got out mostly because Jenelle posted it.”

Jenelle shared the following in a string of text graphics posted to her Instagram stories:

@tmz_tv don’t write false reports. You know damn well YOU STARTED the drama with the dog incident. You got a hold of Nathan’s 911 call to “check on Kaiser cuz a dog was shot.”

I would appreciate if my family can put this behind them and move on. This is ridiculous and very emotional to everyone involved. Thanks.

Jenelle then posted a screen cap of a TMZ article that featured Nathan’s 911 call along with the following caption:

YOU STARTED THIS DRAMA @tmz_tv, YOU CAUSED THIS UPROAR. YOU CAUSED MY FAMILY SO MUCH DISTRESS. So yes, this WAS a private family matter. 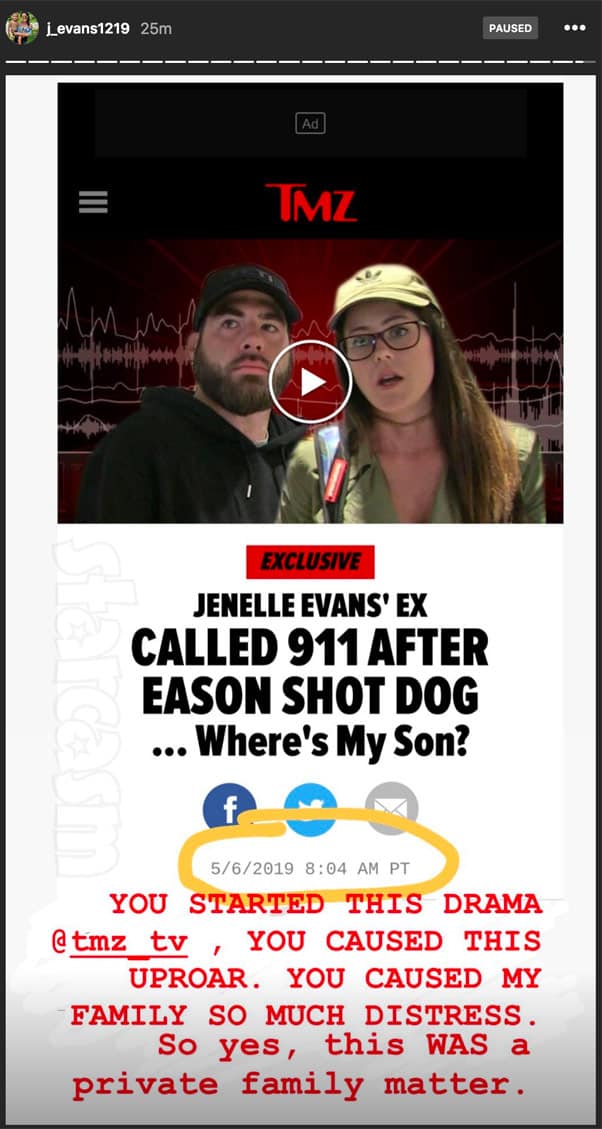 Jenelle is completely wrong on more than one count. First, the media coverage of Nugget’s shooting began a week before the TMZ post about Nathan’s 911 call. For example, our first post about the shooting was on April 30.

I believe that the first news outlet to report on the shooting was Radar Online, and it was due to Nathan’s 911 call — although the content of the call and Nathan’s identity were not known at the time. Radar’s article was posted shortly before ours on April 30.

If Jenelle really wants to try to blame someone other than David for the “uproar” and the “distress” caused to her family, she should first blame the friend that she told about the shooting. Next in the line of blame would be Nathan. Once there was a 911 call placed regarding a public figure allegedly shooting and killing a French bulldog, it IS NOT the media’s fault for reporting on it.

As far as getting everyone to stop talking about Nugget’s killing, I recommend Jenelle and David halt their tactic of doing high-profile interviews discussing the shooting — especially if David refuses to apologize or even admit that he did the wrong thing by shooting and killing Nugget. Most people simply are not going to accept that the only option when a French bulldog nips at a child’s face a couple of times is to kill the dog.

I come from the South with a lot of family members that grew up “in the country lifestyle.” I don’t know any of them that wouldn’t shake their damn heads at someone in a similar situation who took their small dog out back and shot it.

Oh, and while we are on the topic of animal cruelty… JE Cosmetics is coming under a bit of fire after they promoted the new universal eyebrow kit as “cruelty free” on their website using the Leaping Bunny logo. Leaping Bunny is an organization comprised of eight national animal protection groups that has a long list of standards that companies must meet in order to officially earn the right to use their logo on their products. The organization has already responded to inquiries about JE Cosmetics and they have confirmed that they have not endorsed the product.

UPDATE – I just checked the JE Cosmetics website and it appears they have removed the Leaping Bunny logo.