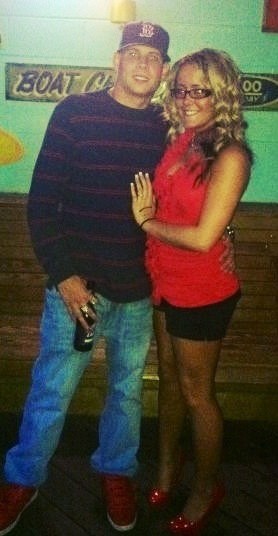 Star Magazine published a story with an “insider” who speculated that they wouldn’t be surprised if Teen Mom 2’s Jenelle Evans was pregnant, citing some recent weight gain as evidence.

Jenelle has since made it very clear to starcasm, various other media outlets, and her Twitter followers that she is not pregnant. The birth control she’s using is called IMPLANON, which is implanted in your arm.

Jenelle gained a few pounds while recovering from breast augmentation surgery, and immediately faced a deluge of insults and criticism. She’s since been going to the gym regularly, and looking really healthy. This photo was taken five days ago on a date with fiance Gary Head (and no, they haven’t split up.)

The minute a woman gains a few pounds, people can use it as an excuse to speculate that she’s pregnant as a thinly veiled “fat” insult, and it can be extremely hurtful.

Multiple charges dropped against Jenelle Evans but is Kieffer Delp filing new ones?