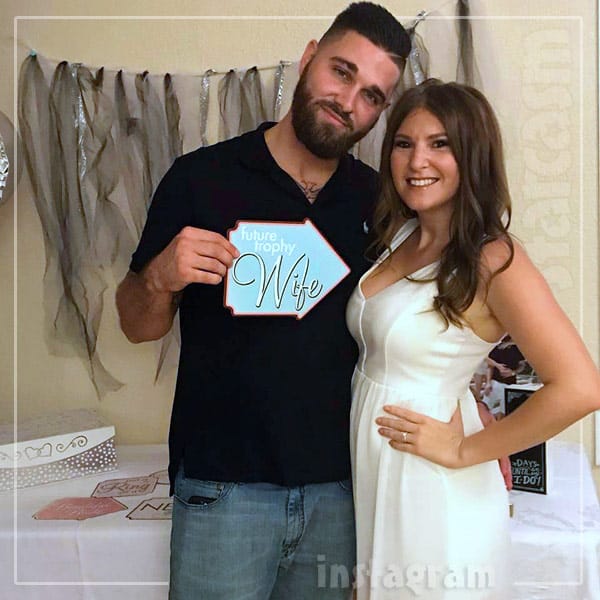 WE tv’s bio for Love After Lockup couple Johnna DiGrigoli and Garrett Tanner reveals that “a wine-fueled evening of looking for love online led Johnna to Garrett, who was serving a seven-year sentence for burglary, grand theft, and several other counts.” The bio has Johnna a bit upset, however, as it suggests that her online searching was how she and Garret met — which is completely untrue.

“I CANNOT TAKE IT ANYMORE!” Johnna wrote on Instagram shortly after the first preview trailer and bios were released. “As you all know we have a show coming out next month,” she says before adding that “the bio the network gave us…is very vague and causing quite a bit of confusion.”

She then clarified in Kanye caps: “I DID NOT MEET GARRETT ONLINE.” She reveals that the two have known each other for a very long time. “I met him when I was in middle school. We had a little puppy love thing going on but nothing serious because again we were children,” says Johnna. So why did the puppy love end? “I moved away to another state, we lost touch and both moved on with our lives.,” she explains.

Fast forward a number of years and Johnna would end up moving back to her hometown of Tampa. She got a job at the fitness center where she and Garrett were in daycare together, “which made me think of him,” she explains. More from Johnna:

I was home one night and decided to look him up on social media, yes there was wine involved because I needed some liquid courage to reach out to someone I hadn’t seen or spoken to in years. When I couldn’t find a social media presence for him I asked around and found out he was in prison. I was shocked but curious so I wrote him with no intention of starting up a relationship. I was not “looking for love in prison”. I had never talked to someone locked up before and it was crazy to me that the sweet kid I knew grew up to be a criminal with a rather long rap sheet so I just wanted to see how and why. One thing lead to another and here we are….

She concedes that it could technically be argued that she did find love online, and she says the the WE tv bio is “accurate,” but “lacks details which is causing me to receive many confused messages and leading to way too many online articles with completely misconstrued information.”

Well, Johnna, I hope we have helped clarify some of that for everyone! I assume that the show will also go more in depth into your story, so the confusion will soon be completely cleared up.

And speaking of going more in depth into Johnna’s story, we have some additional information for you gathered from numerous online sources. I think the best thing to do is just bullet point the info for you — which includes the couple’s 2018 wedding date near the bottom of the list:

• Garrett has a VERY extensive rap sheet that includes arrests for burglary, grand theft auto, selling stolen merchandise, possession of a controlled substance, credit card fraud, and more. The WE tv bio actually does an OK job relaying just how serious his charges were — resulting in his seven-year sentence. (Johnna says he had a six-and-a-half-year sentence, but I’m OK with WE tv rounding up.)

• Garrett isn’t the only one in this relationship with an arrest history! Click here to find out more about Johnna’s run-in-with the law and resulting mug shot photo. PLUS, see a gallery of Garrett’s numerous booking photos that will most assuredly be inspiring numerous #HotFelon and #PrisonBae memes when the show comes out.

• Johnna and Garrett officially began dating on May 11, 2013 — which means they were a couple for nearly four years before he was released! Here is the oldest photo of them together that I could find online. It was posted by Garrett in September of 2013: 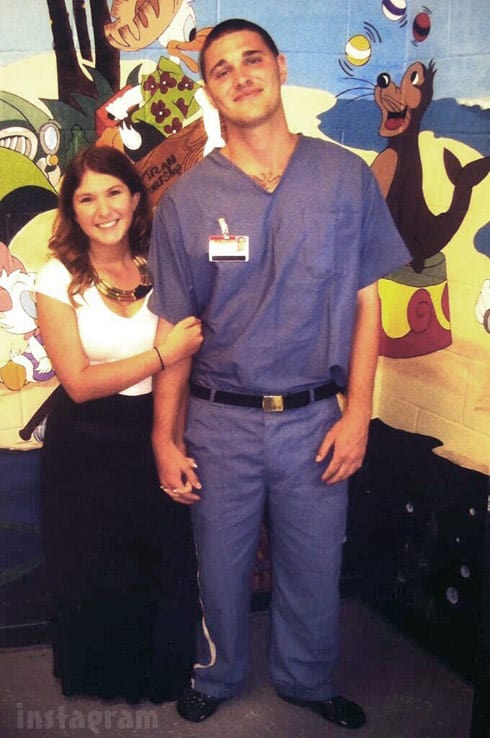 • After they started officially dating, Johnna began posting about their relationship online and branded her multiple social media accounts as “Confessions of a Prison Wife.”

• Johnna may have been in talks for a reality show prior to Love After Lockup. In October of 2013 she posted about having a Skype interview with Lifetime. In January, she updated that the show was still in the works. “If everything goes through and I really make it on this tv show my top goal is to be on [The Ellen Show] show,” Johnna wrote.

Some more photos of Johnna and Garrett together while he was incarcerated: 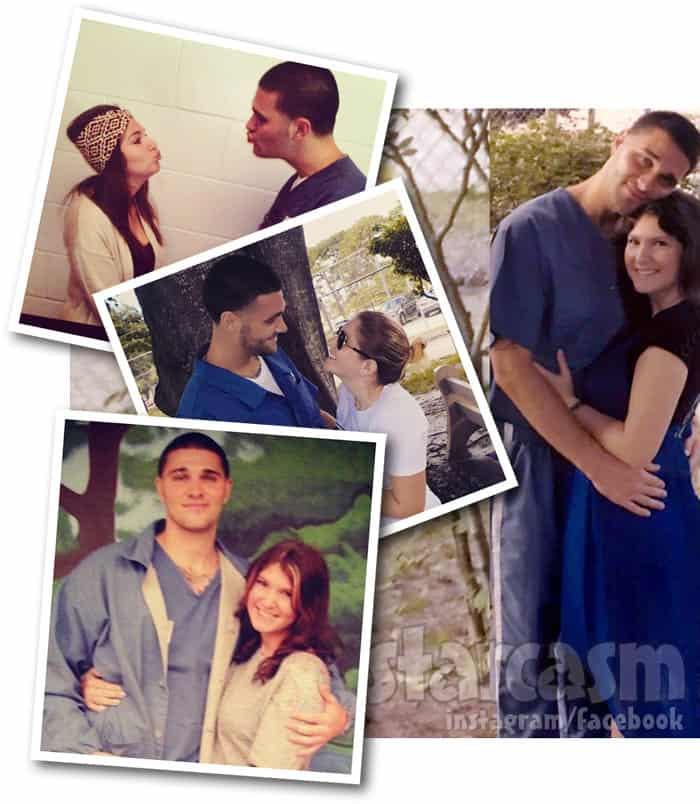 • Johnna has one advantage in that she is already used to dealing with the “haters” — on a smaller scale at least. Here is a post she made back in July of 2016 addressing those folks who were criticizing her for dating Garrett:

I am SO sick of hearing “you can do better” and “why are you settling?” from people who find my romantic situation to be taboo. You are basing this opinion off of one fact, that Garrett is incarcerated. What are the things that constitute whether or not someone is good enough for someone else, hmm? I ask because I believe there are three main categories. How the person treats you, level of attraction, and success. Well Garrett treats me great and makes me feel beautiful, smart and loved every day. I think we can also pretty much all agree that I am not settling in the “looks” department. So that leaves us with success. I don’t need a man to take care of me financially. I’m not in a relationship for money. As long as I see ambition from him, I’m good. So all that being said, do me a favor. Wait 9 months, meet Garrett yourself, then form an opinion. Don’t base your thoughts on him on what you’ve seen in movies about inmates or what you’ve seen happen in other prison situations. For those of you who knew him before, he’s grown up A LOT since then so get to know the changed Garrett when he comes home. People make mistakes and then learn and grow from them. & one last thing, prison rape jokes are over done, ignorant and NOT funny.

• Johnna and Garrett have tattoos of each other’s names.

• Garrett’s release date continued to move forward throughout his relationship with Johnna. She has stated online that when they first started dating he wasn’t scheduled to get out until December, 2018! As recently as last year, his release date was listed as April 22, but he got out earlier as evidenced by a video of his release posted by Johnna on March 27. Here’s are a couple of stills from the video in which you can see Garrett hugging and kissing Johnna for the first time as a free man: 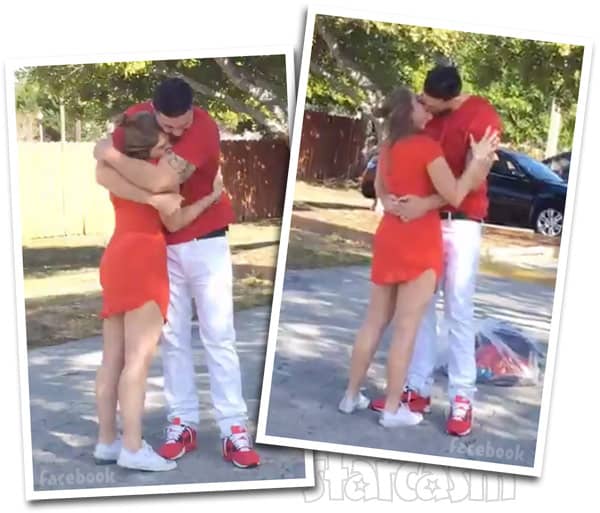 * I didn’t see any WE tv cameras rolling for Garrett’s release, but it’s possible the camera crew was there and merely taping from the same vantage point. (Johnna’s dress is rather sheer and tight, though, so I don’t think she is wearing a microphone — which seems VERY unlikely if a full film crew was capturing the moment.)

• The birthday party for Johnna at which Garrett proposed (as featured in the Love After Lockup preview trailer) took place in early July of this year. (Johnna’s birthday is July 1.) A photo from that shindig: 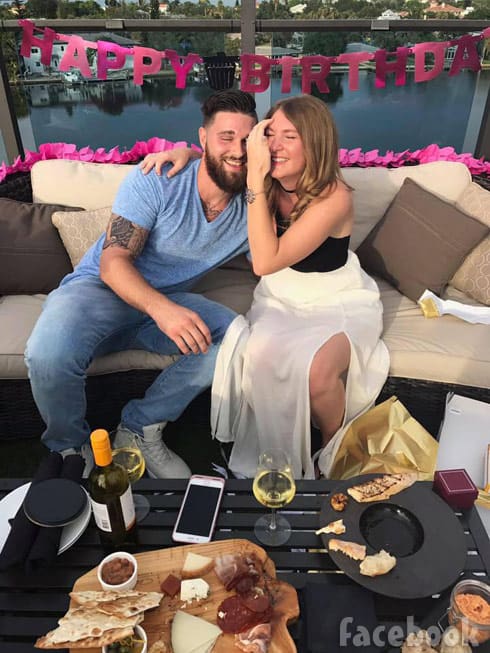 • There was an engagement party for Johnna and Garrett in October.

• Also in October, Garrett posted a photo of a Jaguar automobile and wrote: “To the second most important woman in my life, my Jag….. bringing you back is one of the hardest things I have ever done?. I’ll come back for you one day. #soontobecaddydaddy” Wait, Garrett was driving a Jaguar?! Something tells me this will be a big point of contention on the show, with Johnna insisting that he needs to get rid of it because they can’t afford it.

• According to their online wedding registry, Johnna and Garrett’s wedding date is on their anniversary of May 11 of next year. The wedding will take place in Tampa, Florida.

• It appears that Johnna and Garrett are still together, although both have been mostly silent online since the preview trailer release — which was probably requested by WE tv.

You can follow along with Johnna and Garrett’s relationship journey post-prison with Love After Lockup premieres on Friday, January 12 at 10/9C on WE tv!