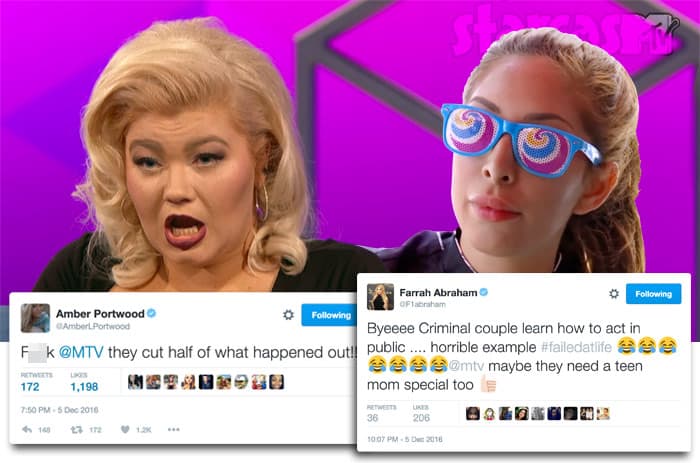 Monday night’s Teen Mom OG Reunion finale lived up to its billing as Amber Portwood stormed the stage screaming at Farrah Abraham before taking a swipe at Farrah’s face — all while Matt Baier was knocking Farrah’s dad Michael into the audience. In addition to that chaotic Jerry Springeresque moment, Farrah’s three co-stars staged an unexpected walk out leaving Dr. Drew high and dry.

As you might have guessed, some of the stars of the show were sharing their thoughts on the episode while it was airing via social media. One person who WAS NOT HAPPY with what was shown was Amber Portwood, who lashed out at MTV for what was was left on the cutting room floor.

As I have been doing throughout the Amber Portwood versus Farrah Abraham and Simon Saran feud over the last few weeks, I have compiled a roughly chronological timeline of their social media posts in a single, easier to read narrative:

AMBER: F**k @MTV they cut half of what happened out!! It doesn’t show Michael in my face calling me a b!tch which is why Matt came out and then he put his hands on Matt first

AMBER: Wow 8 years and this is what I get

AMBER: I’ve worked to hard on myself for this bullsh!t

AMBER: They cut out Michael literally screaming in my face calling me a b!tch and him putting his hands on Matt’s neck… disgusted

AMBER: So much disrespect

AMBER [Separate post on Instagram]: So they cut out Michael literally screaming in my face calling me a b!tch and him putting his hands on Matts neck!! After 8 years this is so disrespectful..I’ve worked too hard on myself to take this kind of disrespect.

AMBER: @KailLowry no I can’t just be portrayed any way they want..love you babe thanks for asking?

KAIL LOWRY: I know, it’s so hard… but you have a circle of supporters that are here for you! Know that! ? love you

SIMON: Taking bets on amber quitting. Matt relies on you I say she doesn’t quit. #TeenMomOG

TWEETER: @SimonSaran Did the producers encourage Amber to run out and fight? You and Farrah handled it really well. #teenmomog #catfight

SIMON: Of course. They tried their best to get s reaction. Just didn’t work.

SIMON [responding to deleted tweet]: no but I was hoping Matt would have said something to me. So short I couldn’t see him

TWEETER: You Just stood there while farrah was about to get her head knocked off, Why?

SIMON: I’ve been in these situations, amber had her chance. The louder they are the less they do. I can see right through her

TWEETER: @SimonSaran I just don’t get what you and Farrah did so bad? Like is it just snapchat? Bc them snaps were funny.

SIMON: sometimes people fear the truth and it causes certain people to act up

FARRAH [Replying to the animated gif of Amber’s swing above]: @TeenMom #feelTheTingle awhhh She just realized she’s to damn short & she’s about ready to cry from all her sh!t talking lies ?#Farrah

AMBER: Now it’s time for me and my girls @CatelynnLowell @MaciBookoutMTV to show how real this is to us..keep watching.. sending love?

MACI: @AmberLPortwood always here for ya! love u!

AMBER: Calling someone a pedophile is not ok nor a joke.. 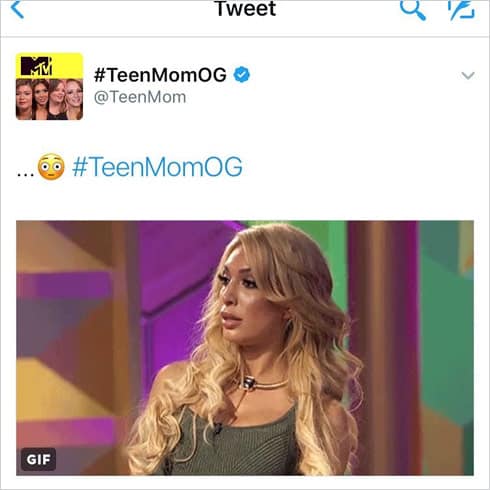 FARRAH [on Instagram with the photo above]: #swerve don’t try to sneak a shot cause some sh!t talkers are crying right now from their embarrassments … I won’t say names ???? #teamfarrah allllllL The Wayyyyyy byeeee 3 stooge losers

AMBER: Well this was a interesting night…always sending love not hate because you never know what hate can bring your way?

AMBER: If I was going out there to hit her than I would have. Just wanted her to say it to my face and of course she didn’t…let’s be honest?

JENNA SHEA: Hey @AmberLPortwood when you called into @F1abraham show with me on you were slurring b!tch you are still on that H stop playing ?

AMBER: I’m gonna block your ho ass and be done with this got it..wow wh0res get so emotional when real women speak up! Goodnight love

TWEETER: aww Farrah’s one friend spoke up? Takes a ho to know a ho.

AMBER: it was nice of her though?

@AmberLPortwood check out the dates of these tweets boo. Expose her ? pic.twitter.com/olsuVLX6bo

I'd be embarrassed if I was like the 3 stooges but instead they all wish they could be me ??✨?? maybe one day #growup #TeamFarrah pic.twitter.com/1hNqgWZIZr