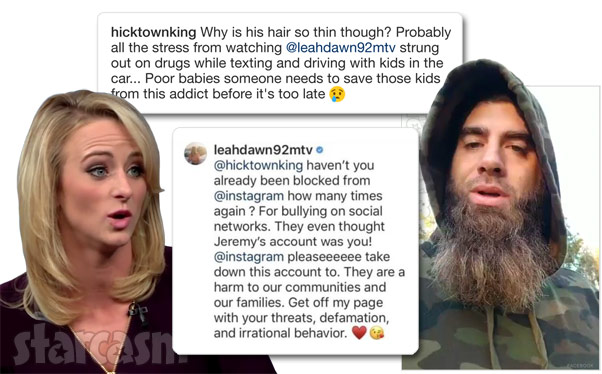 Fired Teen Mom 2 dad David Eason continues to try to stir up drama with his wife’s co-stars on social media. Earlier this month, David went out of his way to comment on an Instagram photo of Leah’s ex Jeremy Calvert by writing that Jeremy looked “like a b*tch” in the picture. That set Jeremy off, and he responded with an epic clapback in which he called David a “stupid f**king ignorant *ss” and a “non working piece of sh*t.”

David and Jeremy’s interaction got both of their Instagram accounts locked, which is nothing new for David. He was soon back on the site with a brand new ID, and he went right to Leah Messer’s account to troll some more. On a photo of Leah and Jeremy together taken backstage at the Teen Mom 2 Season 9 Reunion, David felt it necessary to offer up his observations.

“Why is his hair so thin though?” David asked, in reference to Jeremy. “Probably all the stress from watching @leadawn92mtv strung out on drugs while texting and driving with kids in the car,” David added. “Poor babies someone needs to save those kids from this addict before it’s too late ?”

Leah would later respond to David’s comment, and she issued a plea to Instagram to once again block his account. “Haven’t you already been blocked by Instagram how many times again for bullying on social networks?” Leah asked, tagging David’s new @hicktownking account. “They even thought Jeremy’s account was you!” she added.

Leah then asked for help from the social media platform. “@Instagram pleaseeee take down this account too. They are a harm to our communities and our families.”

Leah finished by addressing David again: “Get off my page with your threats, defamation and irrational behavior!”

It doesn’t appear as though Instagram has complied with Leah’s request as David continues to post on his newest account — including a couple of Instagram stories about Leah’s comments on this week’s episode in which she revealed that her NuvaRing prescription had run out and was using the Plan B pill “as needed.”

David posted a screen cap of Leah from the scene that included the following text:

Plan B is not to be “taken as needed.” I wouldn’t expect anything better from this dumb*ss. She can hardly even form a sentence when she talks.

David followed that up with a screen cap of the Plan B FAQ section from their website. The photo included the question “How often can I take Plan B?” with the following portion of the answer highlighted: “Remember that it should never replace regular, long-term methods of contraception.”

Jenelle got in on the Plan B drama as well by posting an Instagram story survey asking her followers “Is Plan B birth control?” She also retweeted someone who wrote: “Plan B is emergency birth control that is used ideally within 24 hours.”

Leah was asked about her Plan B comment on her most recent podcast episode. “I do not think it is something that should be used frequently, but if something would happen, I would use it,” Leah explained, before iterating: “I used it as needed. If I felt like I needed it, then I would use it.”

In Leah’s defense, there is clearly a cut in the scene where she is talking to her friend while on the way to the gynecologist. “That’s right, so I can get on some birth control,” she explained. The view then cuts away from Leah to show the car window and the scenery going by outside as Leah’s voice seems to change. “Well, my NuvaRing prescription actually ran out, so I’ve been using Plan B as needed.” The scene then awkwardly cuts back to Leah as she’s driving. “Yeah, I needed a different birth control. The last birth control — I was using the NuvaRing before, but it was breaking my face out.”

Meanwhile, Jeremy Calvert has also gotten a new Instagram account after being locked out of his previous one, but he has yet to respond to David’ latest derogatory comments directed at Leah.