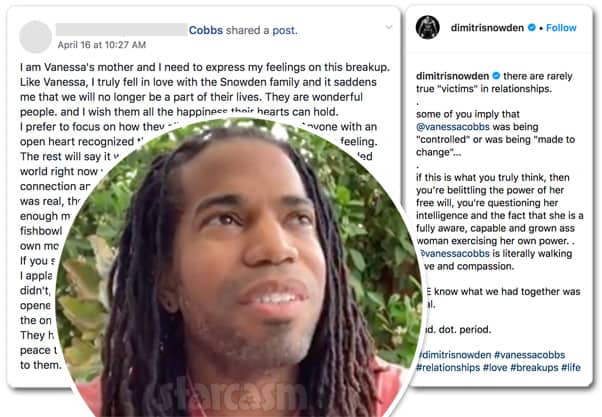 The fallout continues after the shocking post-Tell All announcement that Seeking Sister Wife star Vanessa Cobbs has left the Snowden family. The announcement came via a simple text-only sentence during the Tell All credits with no explanation about what happened.

Vanessa and the Snowdens issued lengthy statements shortly after the episode aired, but fans are still clamoring for more information. In addition to wanting to know more, fans are also becoming more vocal with their speculation — including accusations that Vanessa was being manipulated by the Snowdens, or that the entire relationship was simply faked for TV.

Dimitri responded to the speculation with an Instagram video on Saturday. “There are rarely true ‘victims’ in relationships,” he began his caption. “Some of you imply that @vanessacobbs was being ‘controlled’ or was being ‘made to change’…if this is what you truly think, then you’re belittling the power of her free will, you’re questioning her intelligence and the fact that she is a fully aware, capable and grown ass woman exercising her own power.”

Dimitri describes Vanessa as “literally walking love and compassion” before asserting: “WE know what we had together was real. End. Dot. Period.”

Here is the video followed by a full transcript:

there are rarely true "victims" in relationships. . some of you imply that @vanessacobbs was being "controlled" or was being "made to change"… . if this is what you truly think, then you’re belittling the power of her free will, you're questioning her intelligence and the fact that she is a fully aware, capable and grown ass woman exercising her own power. . @vanessacobbs is literally walking love and compassion. WE know what we had together was real. . end. dot. period. . #dimitrisnowden #vanessacobbs #relationships #love #breakups #life

A quick message for you guys. In doing some reflecting, I want to share that Vanessa is an intelligent, smart, light(?), bubbly, compassionate — she’s walking compassion! She’s like walking love, fully capable of making her own decisions, right? She’s, like, she’s her own woman. She’s a grown ass woman! And what we had was real. Like, you can’t — you can’t fake that level of intensity. You can’t fake — you can’t fake that! That was real. So real that the level of bravery and the challenges, the amount of energy it took to come to this decision for us to part, was beyond intense. I know there’s probably a million and one things we all could have done different and better, but at that time we all do the best we can. And you can’t know until you know. But what I do know, is that was a hundred per–

Vanessa’s mom JoJo has also chimed in with her reaction to the claims that the relationship between her daughter and the Snowdens was fake by insisting it was not. She shared an affirmative motivational text graphic about being patient with our emotions and our reactions to things in the moment along with the following message:

I am Vanessa’s mother and I need to express my feelings on this breakup. Like Vanessa, I truly fell in love with the Snowden family and it saddens me that we will no longer be a part of their lives. They are wonderful people. and I wish them all the happiness their hearts can hold.

I prefer to focus on how they all looked at the wedding. Anyone with an open heart recognized the true joy and happiness they all were feeling. The rest will say it was all acting, that’s their choice. We live in a jaded world right now where some people have lost touch with their heart connection and only see through the filter of the limited ego. The love was real, the joy was real. Many marriages end in the first year. It’s hard enough making a new marriage work with just two people, let alone 3, in a fishbowl, with everyone judging your every movement, especially your own mother-in-law! Vanessa is a very sensitive, loving, emotional woman. If you saw that as fake, that is a reflection of your heart, not hers.

I applaud them all for following their hearts and trying to make it work. It didn’t, but that doesn’t mean it can’t with the right people. I think they opened many people’s minds that all relationships don’t have to look like the one you were raised in and that’s a good thing.

They have all grown from this experience, I hope you will give them the peace to heal their pain and move on to the next adventure life presents to them. With love, JoJo

Vanessa’s mom also took time to respond to a few comments and questions:

COMMENT: I don’t think the acting or her just wanting to be on TV, was ever anyone’s thoughts until her best friend said that. Is Vanessa still best friends with said friend?.

JOJO: It was taken out of context, as Donna knew quite well, but, for some strange reason I cannot fathom, she seems to enjoy making Vanessa cry. 2 of Ashley’s friends were talking with Dani and they were all saying what a perfect match this is for all of them because they have so much in common, including the shared desire to be on TV someday. The same desire shared by millions of people, especially the younger generation. Dani is still her best friend. 🙂

It was announced at the end of the #SeekingSisterWife Tell All that Vanessa left the Snowdens after filming. Read their statements about the split, plus Vanessa addresses rumors that their story was fake and claims she was not paid to do the show. https://t.co/jwhqunxaiJ

JOJO: Sorry, the mama bear came out in me when I saw her bring my daughter to tears, once again, asking the same question she has received the same answer to several times. She enjoyed bringing my daughter down and she will not be one of the people we miss.

COMMENT: I think the curiosity and why some people think that Vanessa just did it to be on tv was because they all did appear so happy, even at the tell all…so it was shocking to see the statement at the end that Vanessa had left.So people think there has got to be more to it than what they are saying happened But maybe it is the truth…both of vanessa’s susters did say in the beginning that they couldn’t see vanessa in this lifestyle and that she was not being true to herself .

JOJO: The Tell All was filmed months ago, Vanessa just left a couple of weeks ago. The producers added that at the last minute to explain why all interviews were cancelled.

Meanwhile, Vanessa continues to enjoy spending time as far away from her former family as possible! She’s currently in Australia with her sister, and she posted this rather joyful gallery of photos and video from there this weekend:

Fishin’ with the sis ?? . There were only tiny blowfish out this day, so we decided to hang off the dock and just feed them instead ?

So what do you think? Was the relationship between the Snowdens and Vanessa the real deal, or were they just faking it to have a story line for the show?