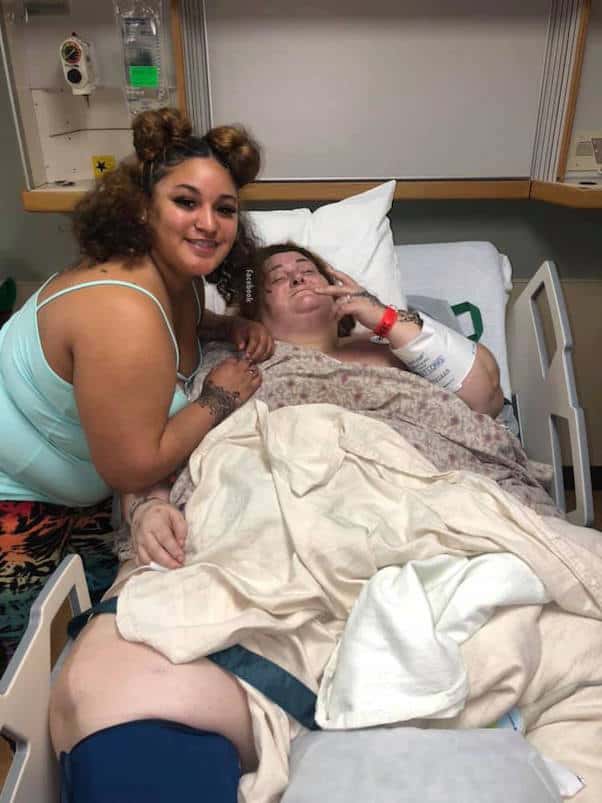 Fortunately, there’s a break in the horrible news about Coliesa from My 600 Lb Life. Last week, Starcasm broke the story of Coliesa’s recent hospitalization and doctor-induced coma after suffering a rupture in her gastric sleeve. After flatlining in her hospital bed, Coliesa’s family members shared dire details of her situation. But now, it appears that the worst may be behind the Season 8 star.

As we reported on March 25th, Coliesa was actually unable to watch her My 600 Lb Life debut a few weeks back. She’d been in the hospital since late February, and her condition seemed to be growing worse by the day. Coliesa’s niece Blair, herself a nurse, explained that the 41-year-old Louisianan suffered a ruptured suture in her gastric sleeve. That in turn resulted in sepsis. Pulmonary edema kept Coliesa on a ventilator for the better part of a month. And by March 19th — the day after her My 600 Lb Life debut — Coliesa had flatlined, though doctors were able to bring her back.

How is Coliesa from My 600 Lb Life doing today?

Since Coliesa flatlined, her family members have offered only minimal updates on her condition. But that all changed this week, when daughter Hannah shared some unexpected and very happy news: despite her original prognosis, Coliesa from My 600 Lb Life has apparently made it through the worst of it.

And, although Hannah hasn’t offered any more details in specific updates, a friend further revealed in an exchange with Hannah that Coliesa is conscious enough to make phone calls. “I got to talk to her yesterday,” the friend said, adding, “I felt shocked and was speechless when I heard her voice.”

The good news about Coliesa is a breath of fresh air for My 600 Lb Life fans wondering about show’s future given its many recent controversies. While Coliesa herself was something of a divisive cast member, it’s worth pointing out that she did qualify for weight loss surgery, lose 150 pounds, and resolve to give up smoking by the end of her debut. Hopefully, before too long Coliesa will be out of the hospital and back home, where she can convalesce and continue her weight loss success surrounded by family.

In case you missed it the first time around, Coliesa’s My 600 Lb Life debut is now available for streaming on the show’s official site.

(Photo credits: Coliesa from My 600 Lb Life update via Facebook)

PHOTOS Sammy Sosa’s bleached skin pictures before and after