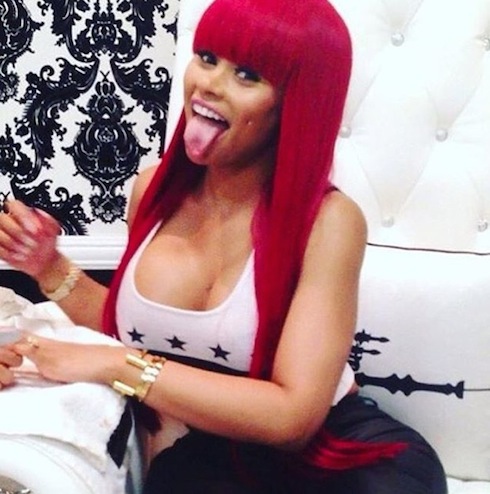 Blac Chyna and Rob Kardashian stunned the internet yesterday, when Blac shared a photograph of herself and the oft-unseen Kardashian brother snuggled up good and tight in bed together. Blac, who is best-known as the mother of Kylie Jenner’s boyfriend Tyga’s son King Cairo–and who’s also the instigator of many a Kylie Jenner feud–was widely perceived to be trolling the Kardashian family with the Instagram upload. Recent events, though, indicate that Blac Chyna and Rob Kardashian could be here…to stay.

A photographic analysis of the detailed arm tattoo included in the Blac Chyna and Rob Kardashian photo proved that Blac and Rob are indeed the friendly couple seen below:

As soon as the shot went up, fans and observers went wild. What was the pair up to? Were they really involved? Was this simply an elaborate stunt? A trolling effort? Or something even more devious? At least one new report claims that Tyga is “furious” over Rob’s break with Kardashian protocol. “This is the type of [stuff] Tyga would expect from Blac—not Rob, though,” said an insider who has close, personal knowledge of the delicate situation. And, according to that insider, the thought that this is one big troll job might not be far removed from the truth:

Rob’s to blame for this, and Tyga has a problem with Rob messing around with his ex. It’s just not cool and too close to home for Tyga. He has more respect for Rob than he does for Blac—Blac would do just about anything for attention and to get under Tyga’s skin.

Reports that Rob is not scared of the fact that Tyga has a problem with him could not be confirmed. However, just this afternoon, Rob himself took to Instagram for only the second time in a month to share his response to the whole Black Chyna and Rob Kardashian conundrum:

A pair of Superficial dispatches appear to confirm the likelihood that the Blac Chyna and Rob Kardashian relationship is genuine–for now. The proof that the couple is “banging” apparently comes from the Kardashian family’s reaction: for one thing, Kylie Jenner shared (and then deleted) a photo of a demon, captioning it “This is Rob Kardashian lol;” for another, Khloe tweeted a series of quotes about betrayal from the Godfather trilogy, before claiming innocence and saying she’d merely watched the movies over the weekend.

And, in perhaps the most telling of all the Kardashian reactions, unflappable Momager Kris Jenner acknowledged that yesterday had been “challenging” specifically because of the unforeseen and ongoing Blac Chyna and Rob Kardashian drama.

Had a challenging day & walked in the door to this gorgeousness that put the biggest smile on my face & in my heart pic.twitter.com/nPRqtaTyNG

Though she has updated her Instagram feed several times since yesterday, Blac Chyna has yet to offer an official comment on the Rob Kardashian situation.

What kind of job is Jon Gosselin working now?