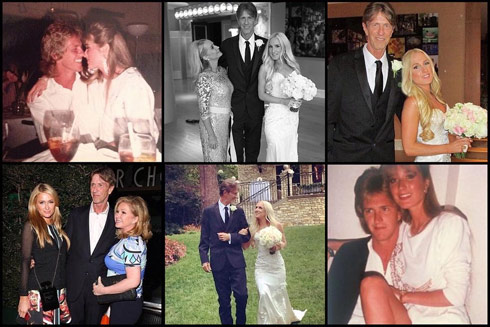 As we previously reported, The Real Housewives of Beverly Hills star Kim Richards’ ex-husband and best friend Monty Brinson passed away on Sunday after a very long battle with cancer. Since his passing, Kim and other family and friends have taken to social media to share their thoughts on Monty, who seemed to warm the hearts of everyone who was lucky enough to know him.

I will just step out of the way and let everyone speak for themselves, including Kim, daughter Brooke, Kim’s sister Kyle Richards, niece Paris Hilton, and more:

Yesterday I said goodbye to best the friend I've ever had in my life.. Monty was an amazing person with an amazing soul … We shared over 30 years of Love & Happiness and brought a beautiful daughter into world. I am so grateful for all that we shared. I know we will be together again one day?I love you Monty❤️ my angel?in heaven .. and I know that we be together again one day. I will carry you in my heart always my love❤️…until then , may you rest in peace ??

Yesterday we lost an amazing man. My father fought till the very end and never gave up. He was surrounded by everyone he loved and went peacefully. Today is bittersweet knowing that he is at peace and doesn't have to fight this horrible disease anymore. Thank you everyone for your kind words. I know he is looking down and checking his Instagram ?. I love you SO much Dad. Thank you for being the best father you could be to me and my sisters. I will miss everything about you. You always called me your angel but now you are my guardian angel. Until we meet again…??❤️

We love you @montybrinson you will be missed dearly. ❤️ The kindest , gentlest soul who inspired so many with his positive attitude throughout his battle with cancer ❤️ May you rest in peace now…

Heartbroken to hear the sad news of my Uncle @MontyBrinson's passing after his long brave battle with cancer. He was such an incredible man with such a huge heart. He was so insightful & positive about life, even with all he was going through. He always had a smile on his face & lit up the room with his positive energy & fun personality. He will be truly missed. ? My thoughts & prayers are with @BrookeWiederhorn @KimRichards11 & his family. ?? #RIPMontyBrinson

@Theplaza2119 @KimRichards11 @BrookeBrinson Thank you so much, he truly had the sweetest ❤️ in the world. We will all miss him,

@beeanni Thank you. That's a beautiful way to look at it. XxOo

RIP monty you did make it too 2016!! Ur positive vibes will be missed dearly by Us all @ParisHilton pic.twitter.com/0kJBgc8SoY